Dear readers, am I the only one perplexed and annoyed by the “home-made” proclamations of corporate food processors and chain restaurants?

I’m curious, whose home might that be? Is there an elaborate network of home cooks (or, perhaps, elves), whose members FedEx fragrant loaves of bread to select supermarkets and submarine sandwich shops? Or, perhaps, multi-national food conglomerates erect factories, made up of strings of tiny houses, where workers hand-crank vanilla bean ice cream by day and crimp crusts of “artisanal” frozen pies by night.

It was several forlorn containers of coleslaw at my local supermarket, all sporting “homemade” monikers, that recently piqued my ire—and fostered this mini-rant. The identity of the contents was long-since smothered; the textured bits afloat in the contained sea of mayonnaise could have been anything from cabbage to macaroni to Styrofoam packing peanuts. A factory cookie may pass for home-baked if you’re not paying attention, and restaurant roll may slide by as a home-oven creation (so long as you’ve never experienced a genuine home-baked roll), but production-line coleslaw is to homemade slaw what Muzak is to Mozart.

Regrettably, coleslaw consumption of any kind seems to be waning, despite a wave of popularity from the 1950s through the 1970s. Members of my 30-something generation are uneasy with coleslaw in particular, but also cabbage in general; the latter is not a glamorous vegetable, nor is its culinary potential self-evident. Further, cabbage lacks the dunking or dipping charm of fellow nerdy vegetables, such broccoli florets, asparagus spears, and infantilized carrots. The nail in the coffin is that “slaw” bears an ill-fated, audible resemblance to “slop.”

Yet these are minor hurdles in light of the glories of cabbage coleslaw. That’s right glories. When the mayonnaise is kept to a minimum (or oustered altogether), a dish of coleslaw is vibrant superfood, loaded with vitamins C and A, an assortment of phytochemicals, and a wallop of fiber. Though Dutch in origin (koolsla meaning “cool cabbage”), coleslaw is thoroughly American by virtue of its simplicity, frugality, and adaptability to all varieties of flavor combinations. And f the name “slaw” nags on, just call it a salad.

Citrus was the flavor inspiration for my rendition of slaw the other night. The coleslaw was a way to balance the flavors, as well as the overall cost, for the other part of the meal. We splurged and grilled some red snapper (from Central Market, thanks to my friend Lindsey offering to shop for me while she was in Houston). Here’s the recipe—

It would work beautifully with almost any white fish, and certainly chicken or tofu, too. I wouldn’t wait for a splurge to try it; all of the other ingredients are readily available and inexpensive. I should note that I made two small changes that made the prep even simpler: (1) I skipped the cumin seeds and instead added 3/4 teaspoon ground cumin directly into the vinaigrette; (2) I didn’t grill the mango, just cut into spears and served alongside the fish.

A final laurel for coleslaw is that uneaten portions need not be tossed out like green salads. Leftovers make sandwich and burger toppings in place of lackluster lettuce leaves and pale pink tomatoes. Case in point, the impromptu warp I through together yesterday with some of the slaw and some sliced extra-firm tofu strips tossed with hoisin sauce.

Using a knife or food processor, shred the cabbage and carrots. Trim the top of the fennel and reserve 1/4 cup of the leafy sprigs (these are called “fronds”). Grate the fennel bulb. Combine cabbage, carrots, fennel, fennel fronds, and all of the remaining ingredients in a large bowl. Toss well, Season with salt. Let stand at least 30 minutes before serving. Makes 8 servings. 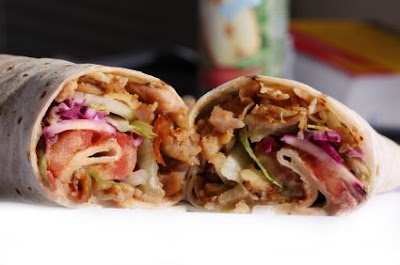