Has it really been five days since my last post? Heavens. But with the holiday, out-of-town visitors, a traveling husband, and a babysitter who cancelled two times in a row–oh, and that little issue of work–let’s just say it’s been a challenge to focus on my favorite activity. For some confused reason, I thought this was going to be an uneventful summer with plenty of free time.

I am happy to report, though, that my sister and I have been devouring the figs I mentioned in last Saturday’s post. In addition, we accomplished the following: toenail painting, the watching of umpteen brain candy shows on BBC America, and, confession, the eating of too many baked cheese doodles accompanied by the sipping of Chardonnay. Sisters are so handy for such silly revelry. Hmm, seems like I might have had some time to post after all, had I focused. Apologies….

Back to the food, namely the figs. First up, I amde a fig pasta. It sounded like a smashing idea at the time (fresh figs, fettuccine, herbs, Parmesan). My sister took a bite and said nothing. I took a bite and said “yuck.” At least I made a small amount, and Nick liked the noodles (picked free of the figs).

Moving on, I made fig jam, with a twist. I like plain fig jam in small quantities, mostly with cheese or used in combination with other flavors in desserts and appetizers; but it’s not my choice for an everyday jam on toast. Moreover, I knew I’d be making plenty given the quantity of figs in my possession.

So I searched around for some variations and stumbled upon a rhubarb fig jam recipe at the blogger Seattle Bon Vivant. I used it as a starting point, leaving out the pectin altogether (fresh fruit has plenty of natural pectin as it is, and I don’t like my jam overly gelled), adding some very ripe strawberries I had lurking in the produce bin, and cutting the sugar by half. I skipped the step of letting the fruit sit (I’m too impatient), and instead just simmered everything about 45 minutes until very tender. Then I used my immersion blender for a few whirls to break up some of the fruit. Yum! We loved it. 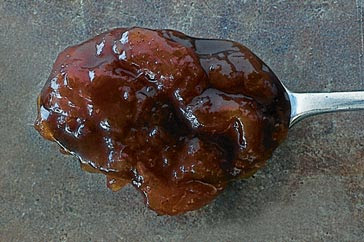 Second, a fig and goat cheese crostini. This isn’t so much a recipe as it is a reminder of what delicious things can be made. Start with a slice of good multi grain bread, toast it up, spread with goat cheese, and top with sliced fresh figs, a drizzle of honey and some oregano. Who needs to cook in 95-degree heat when you can eat like this? 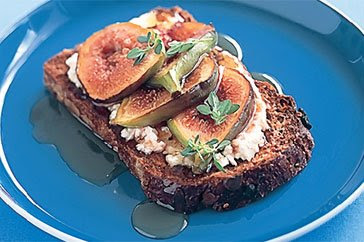 Finally, apparently it is I who needs to cook in 95-degree heat, because I cranked up the oven to 425F and made a sweet-savory tart (one that my sister and I ate for supper along with a salad). I used the small reserve of still-firm figs I had set aside prior to jam-making and, together with the salvages of goat cheese, constructed a 5-minute, free-form tart. Cheers! 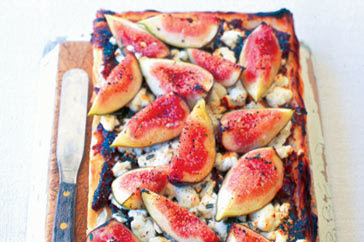 Preheat oven to 425°F. Unfold pastry sheet (it is a square); cut in half. Refrigerate one half for another use. Place pastry rectangle on an ungreased baking sheet and press out fold line. Prick all over with a fork. Bake until golden brown, 12 minutes.

Spread jam over pastry, crumble cheese over, sprinkle with rosemary and season. Lay figs on top. Place under broiler for 1-2 minutes until cheese is lightly golden. Drizzle with honey. Serve with a green salad. Makes 3 servings.