I’ve been on a vegetarian bent since Sunday, largely because it was my husband’s birthday last week, and that meant several days of Kevin’s favorites: steak, cherry pie, fried chicken, red wine… Yum.

It was fun to slip into Southern kitchen queen mode for a spell, especially to celebrate, but I was in dire need of a healthy diet by the time Sunday morning rolled around. Happily, my grand (diabolical?) conversion scheme–winning Kevin over to my Northern California way of eating–seems to be working, albeit in slow spurts (I’ve modified to a 10-year plan). Dare I say he seemed happy–or at least compliant?–about a few days of vegetarian fare. Hee hee.

The quinoa in my cupboard called my name, so I used that as a starting point.

Quinoa (pronounced keen-wah) is often called “the mother grain”, which is more than a little misleading, given that it’s not really a grain at all. Rather, quinoa is a sweet, nutty seed from a plant related to chard and spinach. It’s as easy to cook as rice—maybe easier—and every bit as versatile, from side dishes, to stuffings, even breakfast and dessert.

You’ll find quinoa at most supermarkets and health-food stores in its whole form, like so: 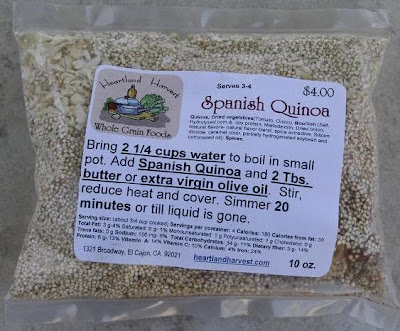 The only “trick” to cooking quinoa is the rinsing (2010 update–more and more quinoa is available now pre-rinsed; I still advise giving it an additional rinse, though). This is not a fussy step, but a required one: quinoa is naturally coated with a bitter substance, saponin (it’s thought to keep away birds and animals). Most quinoa has been “desaponized.” However, it’s still a good idea to rinse it under running water in a fine-mesh strainer before cooking to remove any remaining residue.

And now, more good news: quinoa seeds contain twice the protein of rice, though it’s the quality of the protein that stands out. With all nine essential amino acids, including lysine, quinoa is considered a complete protein.

It’s rich in both vitamin B2 (riboflavin), magnesium, B6 and E, and also has high levels of iron and zinc. There’s more: it’s also a good source of dietary fiber, packing 5.2 grams per 1 cup serving. What a food! I’ll be sharing more quinoa recipes, soon; I have some dessert ideas in mind…

As for the other night, I settled on a batch of quinoa burgers. This is my veganized adaptation of a recipe from Martha Stewart’s Body + Soul magazine  (the original had eggs). I’ve been enamored of quinoa since I first tried it a few years ago, and when I saw this recipe a while back, I knew I had to try it (with my own twists). It is some serious athlete fuel! I think these made me run faster and stronger the following morning, seriously! Happy power eating, everyone.

I make some delicious black bean, quinoa burgers. In a pan cook up some black beans, onions, bell peppers, garlic and steak seasoning (vegetarian variety). In a blender, mix all of the stuff you cooked in the pan with some quinoa. After it’s blended, dump it into a bowl and mix with some plain black beans. Cool it all off in the fridge, form into patties and bake. In addition to being really good, they taste pretty burger-like (the texture is more like meatloaf) AND totally look like burgers so you don’t look like the oddball vegetarian at a grillout.

Here is a post with pictures of my quinoa black bean burgers: http://katespov.blogspot.com/2011/06/homemade-veggie-patties.html

I wrote an article about the dining experience with the Vegan Panna Cotta and the Quinoa burgers (which I credited to yourself of course), and it is one of the most read articles I ever put up!

Just writing to let you know that, and also that I changed the name of my own website, so the links that your blog had to my old site name won't work anymore!

I made this last night only I used mushrooms instead of onions... sooo great! Thank you for the recipe!

I made the Quinoa Burgers to impress a beautiful lady last week (and left a posting on the Vegetarian Panna Cotta page)which went exceedingly well. The Quinoa burgers were great.

So great that I decided to make them again 3 days later, and was committed to it before realising I had no carrot in the house, so substituted sweetcorn (frozen variety, heated up) instead, and a small red chili. Cooked the quinoa with vegetable stock too.

Anyway the point I want to make is...

DON'T OVER BLEND IT. I made exactly the mistake that Camilla warned me not to on the blog and on YouTube - I needed a chunky coarse consistency, not the consistency of a dip. I probably put too much water into the quinoa too, so the mixture was far too runny.

I rescued it by thickening it with some spelt flour, but now I know why fake meat veggie burgers look like they do - the ingredients are just homogenised.

Hey there,these sounds great, just curious though...are these freezable to you propose?and how long do they keep in the fridge? -Anne