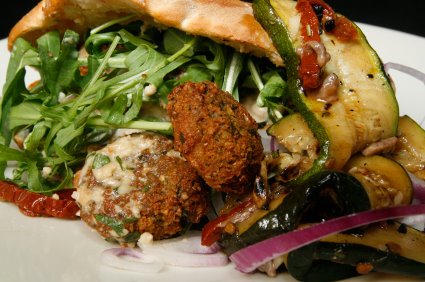 That’s right. I went on a crash diet yesterday. And I loved it. The food was everything I could have hoped for, and more.

I do hope you’ll try it; but only the diet, not the crash.

It’s this simple: I wrecked my car on Thursday. Totaled. Worse, it was my fault entirely. No injuries besides some whiplash (and no Nicky in the car, hallelujah), but my nerves were in shreds, my stomach in knots. Once the doodle was down for his nap, I abandoned all work for a collection of Miss Marple stories (my 50th read? 100th? Somewhere between the two) , and plotted my dinner. I was in desperate need of culinary therapy.

Driving to the store for supplies was out; supper had to come from the pantry (or a pizza delivery guy). I scanned the shelves (while grabbing some tea biscuits; you can’t read a British mystery without tea and biscuits and, in most cases for this blogger, fuzzy socks). Chickpeas? Check. Roasted red peppers? Check. Yogurt? Check. Hello Middle Eastern supper.

Chicken soup, beef stew, mac & cheese, and chocolate cake; they’re all great, I like them as much as anybody. But Middle Eastern food hits all of my buttons. Here’s what I made:

Several elements of the dinner are more easily explained than others. The half bag of arugula in the produce bin was rinsed, spun, and tossed with nothing more than olive oil, salt & pepper, and my new obsession ingredient, sumac. I promise to write about sumac more in later posts. For now, suffice to say it is a powdered spice made from the berries of a bush that grows wild in all Mediterranean areas, especially in Sicily and and parts of the Middle East, notably Iran. It has a sourness and astringency much like lemon juice (and you can use it similarly in recipes). I think I’m developing some dependency issues with the stuff, it’s good in and on everything.

The toasted pita? I scavenged a mildly frost-bitten bag from the depths of our freezer. The two rounds of whole wheat pita looked every bit as abandoned as they were, but I had high hopes that I could revive them. Defrosted, cut into triangles, and toasted in the oven, they came through, in high (ok, elevated edible) form.

What do you do with a poor excuse for a zucchini, a limp red onion, and a wrinkled eggplant? You cut, oil & season, then sock it to them at 450 degrees for 15 -20 odd minutes. Delicious.

Hummus is high on my list of comfort foods, but I didn’t have enough chickpeas, nor any tahini, to make it. Moreover, Kevin will no longer eat hummus, having, according to him, eaten more than his lifetime quota of the stuff at English department parties in grad school.

Enter in muhammara, a Middle Eastern roasted red pepper dip spiced with cumin and cayenne, enriched with walnuts and olive oil, and ready in minutes after a quick whirl in the food processor. Kevin’s as keen on it as I am, and I had the ingredients on hand, so there you go. I’ve been making another version of muhammara (from Gourmet 1993–also available on epicurious) for years (with a few tweaks), but after trying the new version that appeared in the November 2008 issue of Bon Appetit, I made the switch. It has a fraction of the oil (2 tablespoons vs. 3/4 cup) and far more walnuts, which I love.

I do make several tweaks to the muhammara, as follows: (1) I lightly toast the walnuts; (2) I use water-packed red peppers (I’ve never seen the olive-oil packed ones); (3) I reserve a few tablespoons of the liquid from the peppers, and add to the mix to make it smoother (it was too dry without); (4) I use a combination of 2 teaspoons honey, 1 teaspoon lemon juice in place of the pomegranate molasses; (5) I used fresh breadcrumbs–about 1 slice of bread whirred in food processor–instead of Panko (the latter are hard to come by in Nacogdoches, I have to mail-order them); (6) GARLIC!!!! Two to three mashed cloves. I think I need to write down my revisions in a new recipe, I made more changes than I realized!

Finally, falafel. I have no problem with falafel from a box–I make it, I like it, I think it’s delicious. But while in graduate school, I started making it from scratch, too, and it’s just as simple to make as the mix, and even more delicious. A yogurt sauce in the same company is always good, but I had a bit of soft goat cheese (more comfort, big time) hanging out in my dairy bin, so I whisked it in with the yogurt for a simple sauce. Oh goat cheese, how I love you.

I am revived, and thankful to be in one piece. Here’s to crash diets.

To prepare falafel, place the breadcrumbs, cilantro, cumin, salt, red pepper, garlic, egg, and chickpeas in a large food processor. Process mixture until smooth. Divide mixture into 16 equal portions, and shape each portion into a 1/4-inch-thick patty. Heat the olive oil in a large nonstick skillet over medium-high heat. Add the patties, and cook 5 minutes on each side or until patties are browned.