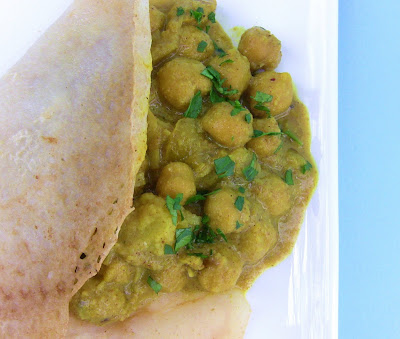 It’s not every day that my husband specifically requests a vegan dinner.

Let me clarify: it’s not any day that my husband requests a vegan dinner, given his spurning of “vegan” from his otherwise extensive lexicon. He is a man of words by both profession and desire (Ph.D. in comparative literature, fluent in several languages), but he refuses to make way for a word that he finds irritating for reasons he will not explain (but are inarguably linked to (a) his Arkansas upbringing; (2) his love of a great steak; and (3) his irrational (my evaluation) dislike of what he views as “extreme” diets).

I find this irritating for reasons I am more than happy to expound upon, but I am willing to accept him as he is.

Especially when he requests a vegan dinner, which he did a short time ago, albeit sans “vegan”. He had been to party co-hosted by our friends Eralda and Bryan, and Eralda had made (among many delicious offerings) a chickpea curry that Kevin thought found utterly delicious. Unfortunately, he had already eaten dinner before attending the party, so he was only able to sample a smidgen. Hence, a request for a chickpea curry for a weeknight meal.

I knew precisely which recipe to try: Rava Dosas with Potato-Chickpea Masala from the the second-to-last issue of Gourmet (November 2009; sniff sniff). I earmarked almost every page in the issue, but this masala, and the accompanying lacy crepes (rava dosas), had been haunting me ever since I read through the the recipe. Its time had come!

I made a number of substitutions and edits to the recipe (you can compare mine with the original). It’s fantastic. It’s vegan. It’s easy. It’s cheap. It’s healthy. And it’s ready and waiting to be added to your recipe to-make list.

Make Masala filling:
Peel potatoes and cut into 1 1/2-inch pieces. Transfer to a bowl and cover with cold water.

Purée ginger and garlic in a blender with curry powder, cinnamon, garam masala, oil, 1/2 cup water, and 1 teaspoon salt until smooth. Transfer purée to skillet and cook over medium-high heat, stirring, until thickened slightly, about 1 minute. Add onion and cook, stirring occasionally, until it begins to soften, about 8 minutes.

Drain potatoes, then add to onion mixture with cumin seeds and cook over medium heat, stirring occasionally, until potatoes are barely tender, about 10 minutes.

Add chickpeas and remaining 1 1/2 cups water, scraping up any brown bits, then briskly simmer, covered, until potatoes are tender, 16 to 20 minutes more. Add peas and cook, covered, until just tender, about 3 minutes. Remove from heat and stir in toasted coconut and cilantro.

Generously brush a 12-inch nonstick skillet with oil and heat over medium-high heat until it shimmers. Pour 1/2 cup batter into skillet, swirling until bottom is coated. Cook, undisturbed, until dosa is set and edges are golden, about 2 minutes. Flip using a rubber spatula and cook dosa until underside is golden in spots, about 1 minute more. Transfer to a plate. Make more dosas with remaining batter, stacking and covering loosely with foil to keep warm. To serve, spoon masala filling into dosas.

The directions call for peas, but the ingredient list doesn't. I didn't notice until I was almost done cooking the filling and didn't have any peas on hand. It was still FABulous, but I might try peas next time so I don't have to make a veggie side! Thanks for the wonderful recipe to add to my permanent collection!

I made a similar recipe for a Daring Bakers challenge and it was so delicious and flavorful and I didn't miss any meat or dairy ingredients at all. I shall try your recipe soon!

This recipe looks tasty, I think I will have to put it on my list of recipes to try.

I know how you feel, my hubby is an omnivore and has similar views on "extreme" diets. I don't think my hubby has requested a vegetarian meal yet, but there's still hope. As long as it tastes good he usually has no complaints.

Yum. I have seen similar dishes at my local Indian restaurant but admittedly have never tried it. You're making me think maybe I should rethink that.

So proud of Kevin for expanding his tastes...;)