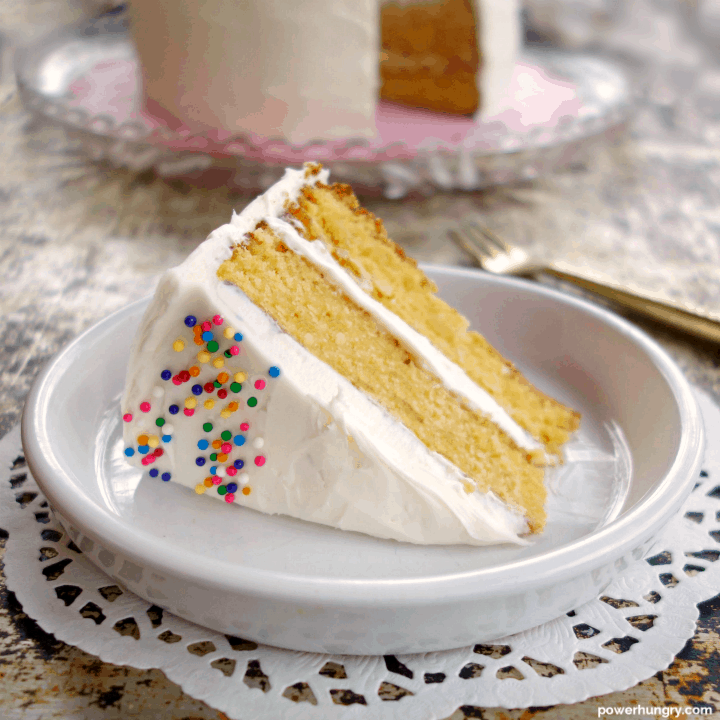 January is my birthday month, so I got the cuckoo notion that I should attempt the creation of a vanilla layer cake that is both vegan and grain-free.

It only took 50 or so test batches to get it right (I’m still finding random batter splotches throughout the kitchen). Do I know how to have some birthday fun, or what?

But it was worth it. 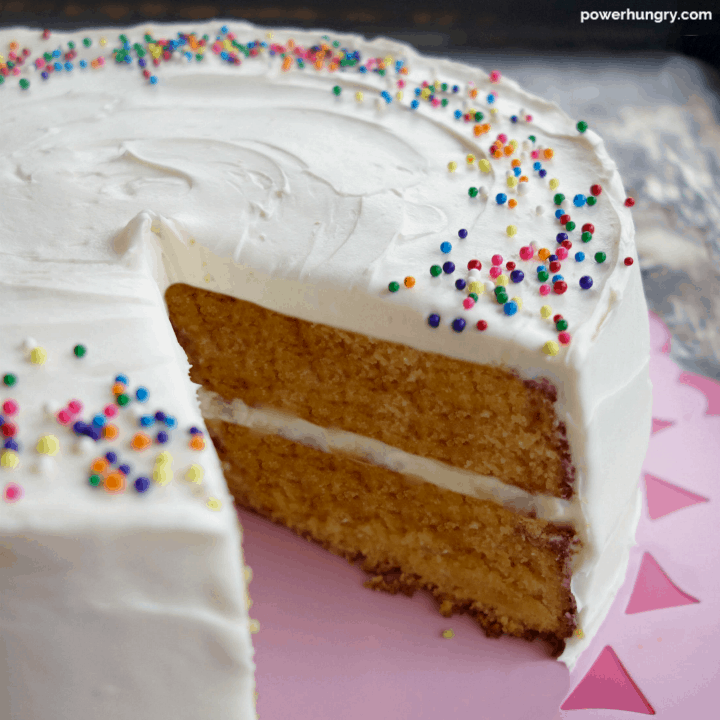 If layer cakes are not your thing, you can also make 2 dozen perfect cupcakes with the same batter: 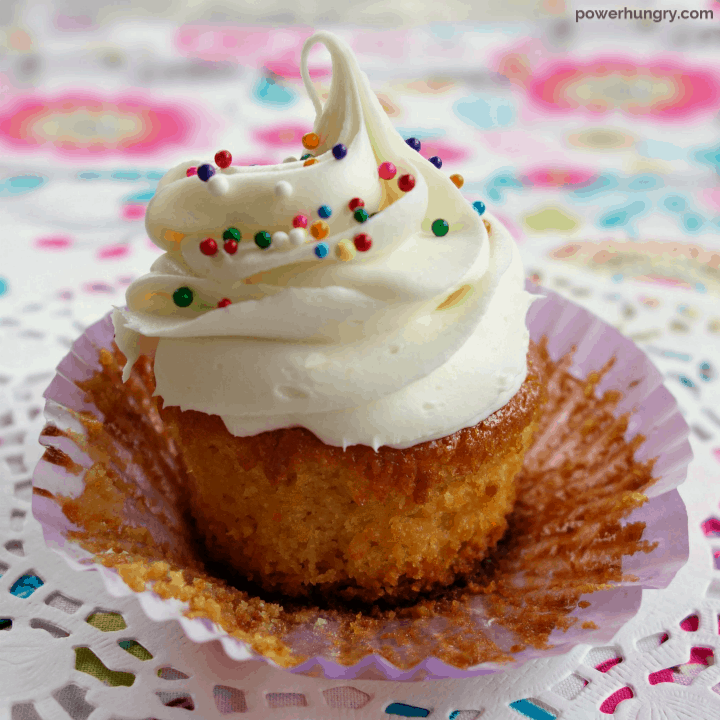 A Few Important Notes About The Cake

Before proceeding with the how-to, I have a few details:

(2) This is not a health food cake. It is a celebration cake. It is rich and sweet. It is meant to rival a traditional butter, all-purpose flour layer cake (or cupcakes). Think birthday cake. Graduation cake. Wedding cake!

(3) As I mentioned in the opening, it took many dozens of experiments to get this right. Success depends on the exact ingredients and proportions. Changing the ingredients and/or altering the proportions will very likely result in a small or large disaster.

Yikes, that last sentence sounds ominous! This is meant to be a joyful post :).  So let’s get on with the happiness of this cake. Whoo-hoo!

What are the Flours Used in This Cake?

So, after what felt more like a million permutations, the combination of flours and starches that worked for this cake is chickpea flour + almond flour + potato starch. 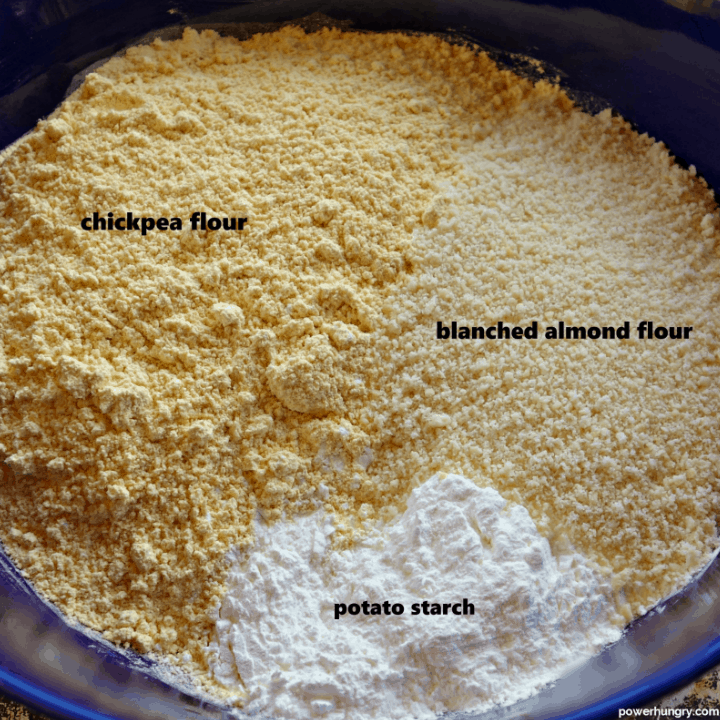 Most of the remaining ingredients are familiar: granulated sugar (I used an unbleached natural cane sugar, but use any fine cane sugar), baking powder, salt, nondairy milk + vinegar (to make a nondairy “buttermilk”), vegetable oil, and vanilla. Whisk the dry ingredients, add the wet, and then add the one unusual ingredient: aquafaba.

If you have not heard of aquafaba, fear not: it is nothing more than the liquid from an ordinary can of chickpeas. But get this: it can be used as a substitute for egg whites! Together with baking powder, it is exactly what this cake needs to rise to celebration cake heights! In the absence of grains, gluten and eggs, it is a minor miracle. 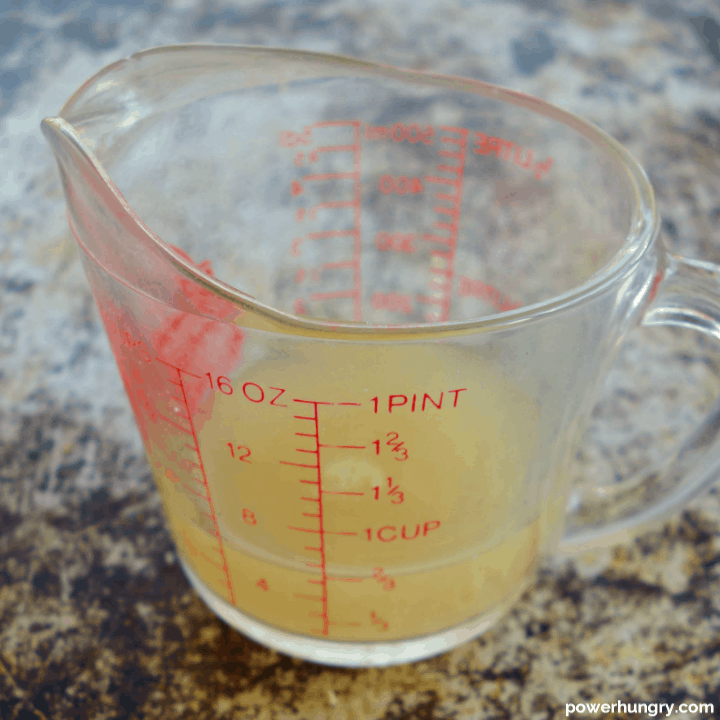 With an electric mixer, beat the aquafaba for 4 to 6 minutes (on high speed) until very light and fluffy (very light peaks will begin to form when the beaters are lifted from the bowl). If you are new to aquafaba, this will likely blow your mind–it looks just like beaten egg whites. 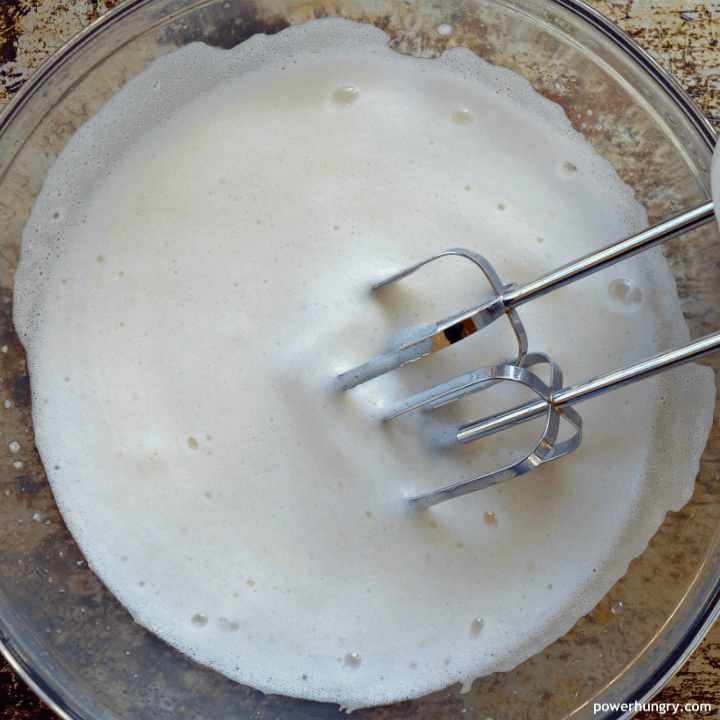 Gently mix in half of the whipped aquafaba to the combined batter. This will lighten the batter. Now fold in the remaining aquafaba (you are trying to keep the air in the aquafaba). 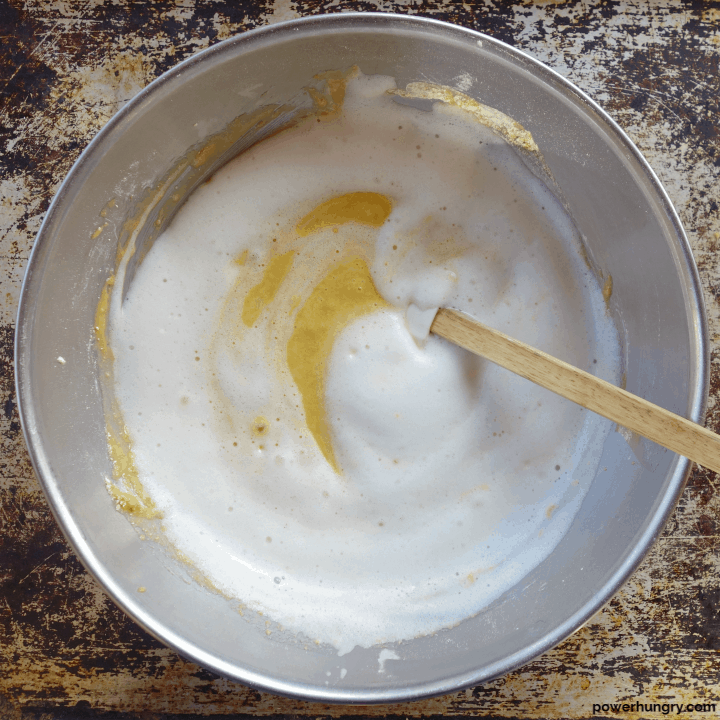 Divide the batter equally between two 8-inch round baking pans (line the bottoms with parchment paper and grease/spray the sides).

Now bake in a preheated 350F oven for 42 to 47 minutes until deep golden brown and a toothpick inserted in the center comes out with only a few moist crumbs attached.

Place the pans on a cooling rack and cool completely (do not remove from pans before completely cool). Run a butter knife around the edges of the pan, turn out the cakes, and peel off the parchment paper.

Check out these beautiful layers! 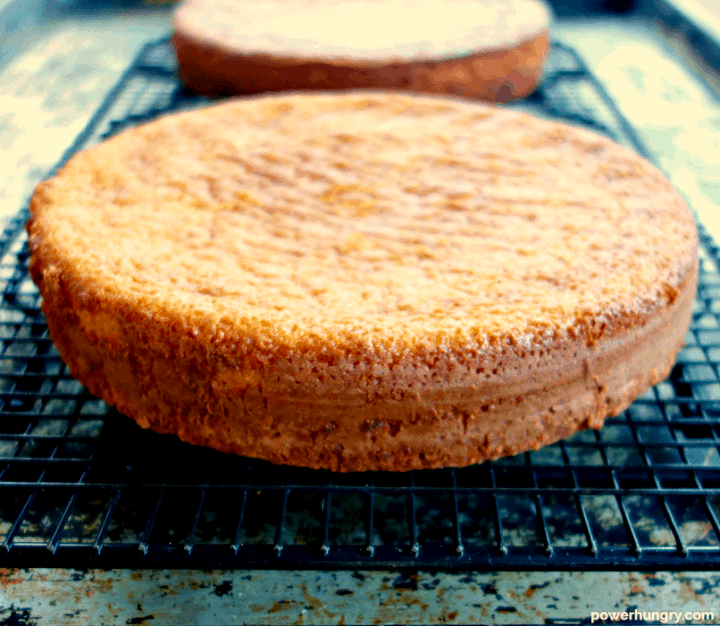 You can ice, frost or glaze these layers any which way you like, but for this traditional (not traditional!) vanilla cake, consider using my simple Vanilla Buttercream (it is also vegan and grain-free; I have tips and a recipe for cornstarch-free powdered sugar). 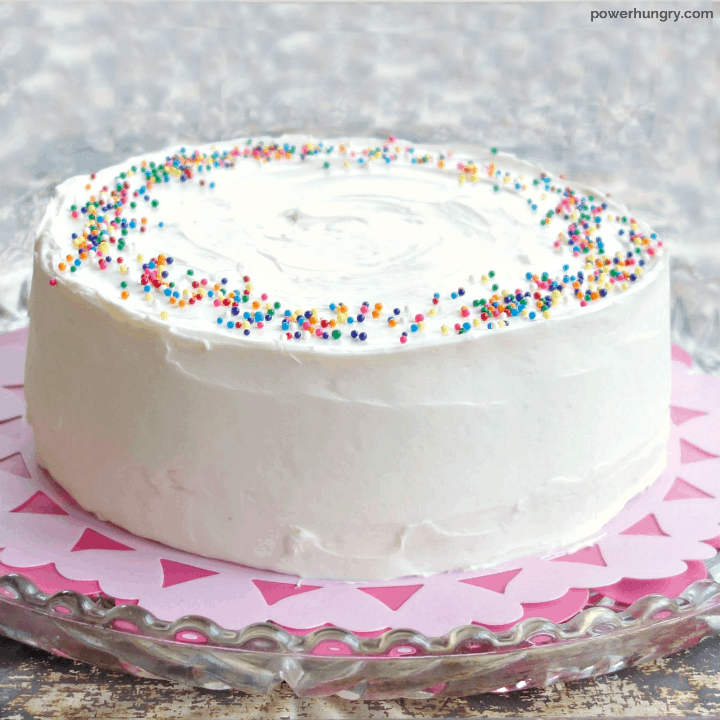 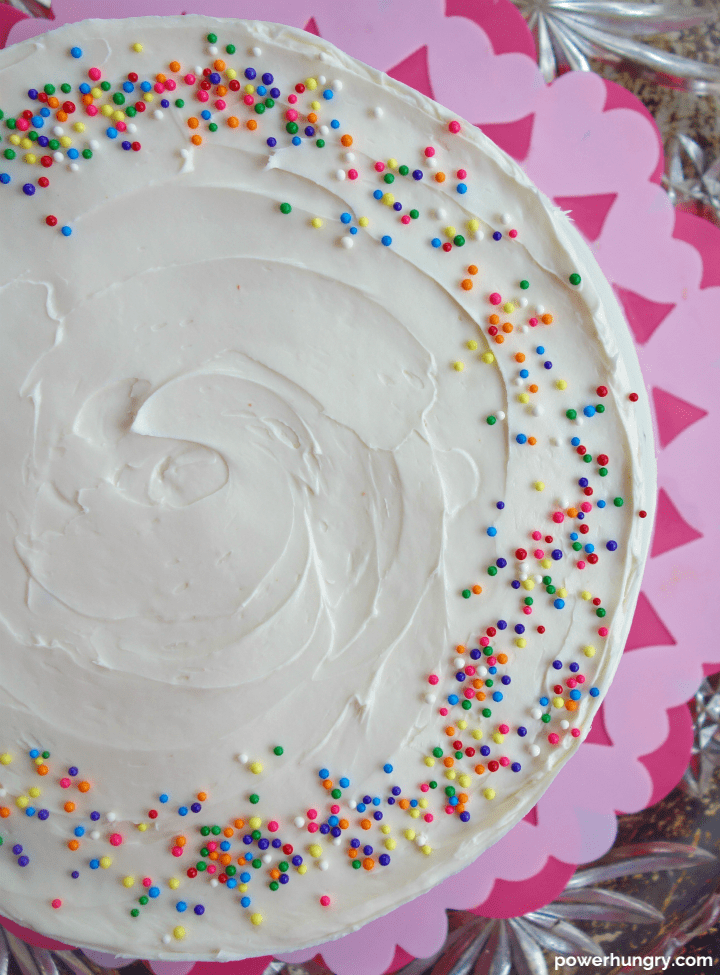 I hope this cake is a part of many happy celebrations to come! Happy baking, everyone! 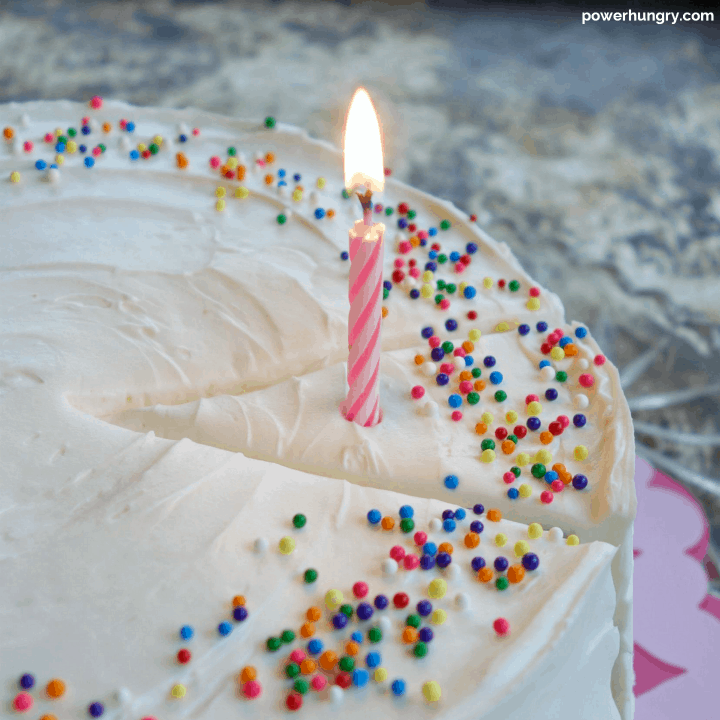 Aquafaba Tip: I find that most 15-ounce cans of chickpeas have about 3/4 cup liquid (aquafaba). Go ahead and buy two cans, just in case one can does not have enough (you do not want to have to run to the store midway through prepping the batter!). Save the chickpeas for hummus or the recipe of your liking :).

One possible substitution: I have not tested it, but tapioca starch and arrowroot work very similarly to potato starch. But to be sure, stick with potato starch.

Cupcakes: To make cupcakes, divide the batter between 24 standard size muffin cups lined with paper or foil liners. Do not overfill the cups! The batter will come up less than halfway in each cup. Bake for 22 to 26 minutes until deep golden brown and a toothpick inserted near the center comes out with only a few moist crumbs attached.

Storage: Store the frosted cake at (cool) room temperature for up to 1 day or the refrigerator for up to 1 week. The cooled, unfrosted cakes can be frozen (tightly wrapped) for up to 6 months. 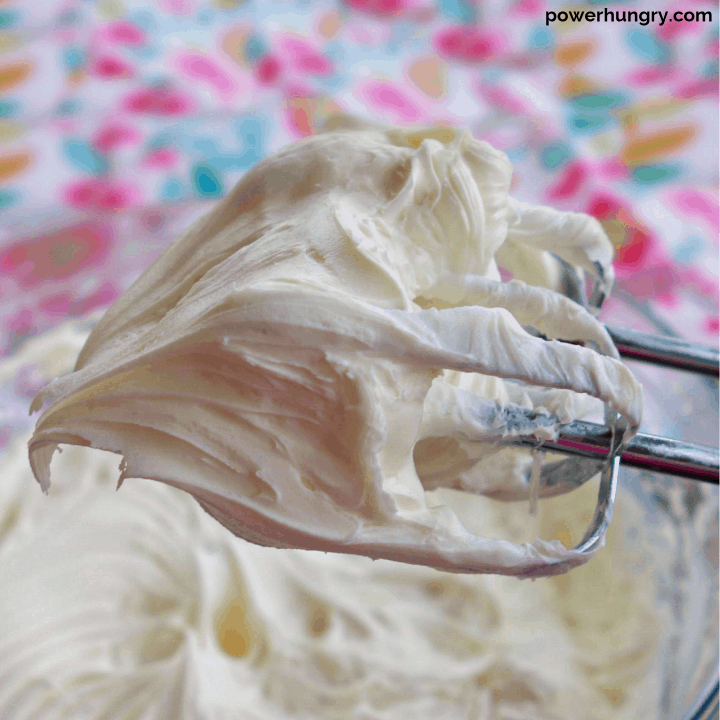 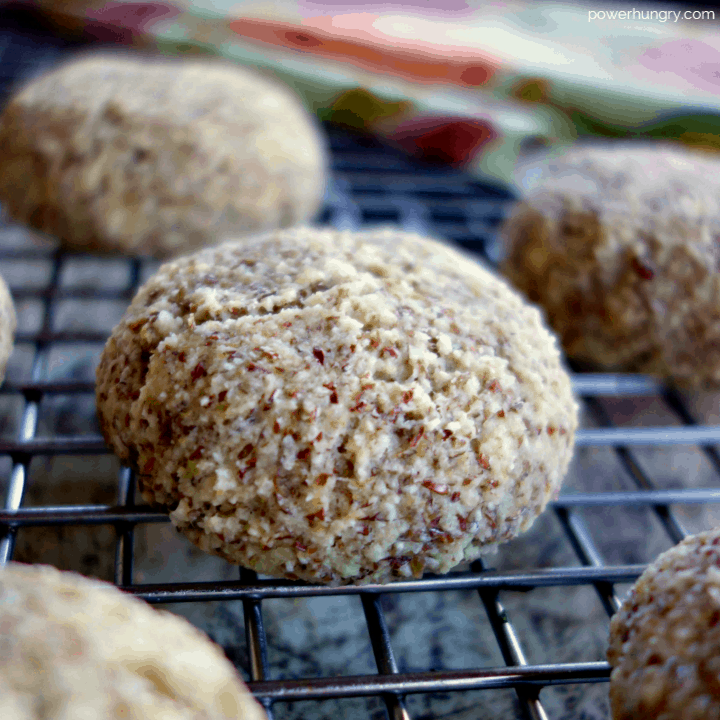 Hello! Is there any way of omitting the oil please?

[…] for vegan vanilla buttercream that is both vegan and grain-free. I created it for use with my Grain-Free & Vegan Vanilla Layer Cake […]

Thanks for sharing this recipe. I will be trying it soon but can you confirm that your cup sizes are 250ml? Thank you :)