A hearty, delicious riff on a classic, my Vegan Lentil Cincinnati Chili is made with red lentils in place of the beef. It is easy, healthy, gluten-free, high in protein, and grain-free (if you like), too! 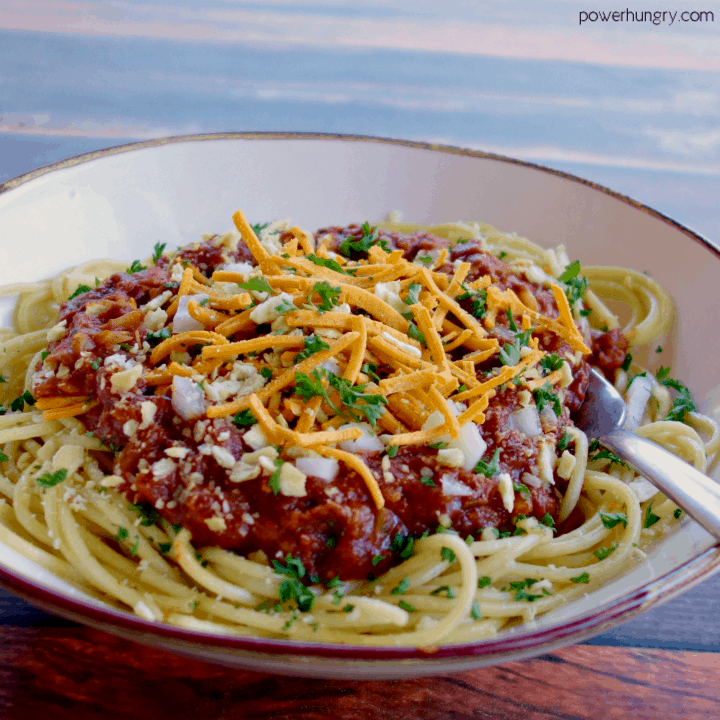 A New Take on Cincinnati Chili

The first time I stumbled upon Cincinnati Chili was more than 20 years ago, while perusing my mother’s copy of Gourmet magazine (December 1992), where a recipe for the dish was featured.

I remember it because I thought it sounded bizarre: a thick, gravy-like tomato sauce, spiced with cinnamon, allspice, cloves and chocolate, served on spaghetti, and topped with crushed oyster crackers, cheddar cheese, and raw onions. Strangest of all: red kidney beans were an optional ingredient, not for adding to the chili, but for sprinkling on top.

“I will NEVER, EVER eat that,” I thought.

Until, years later, when I lived in the Midwest, and I did.

And I loved it.

I’m confident you will, too, and my healthy, plant-based, gluten-free (and, even grain-free) interpretation makes it accessible to almost every kind of eater, too!

First things first: with apologies to the fine citizens of Cincinnati, you don’t have to think of this as chili. If you live in Texas, as I do, it is especially important that you call it anything but chili, especially if serving to a native Texan, as they might think you have lost your marbles.

It’s fine to refer to it as a spicy pasta sauce, because that’s what it is. Credit for its origin belongs to a Macedonian immigrant (and restaurateur) who created the recipe in 1922 for his Cincinnati restaurant. He added Middle Eastern spices and chili powder to a beef-based tomato and broth sauce and called his creation “spaghetti chili.” Cincinnati has been crazy for it ever since. 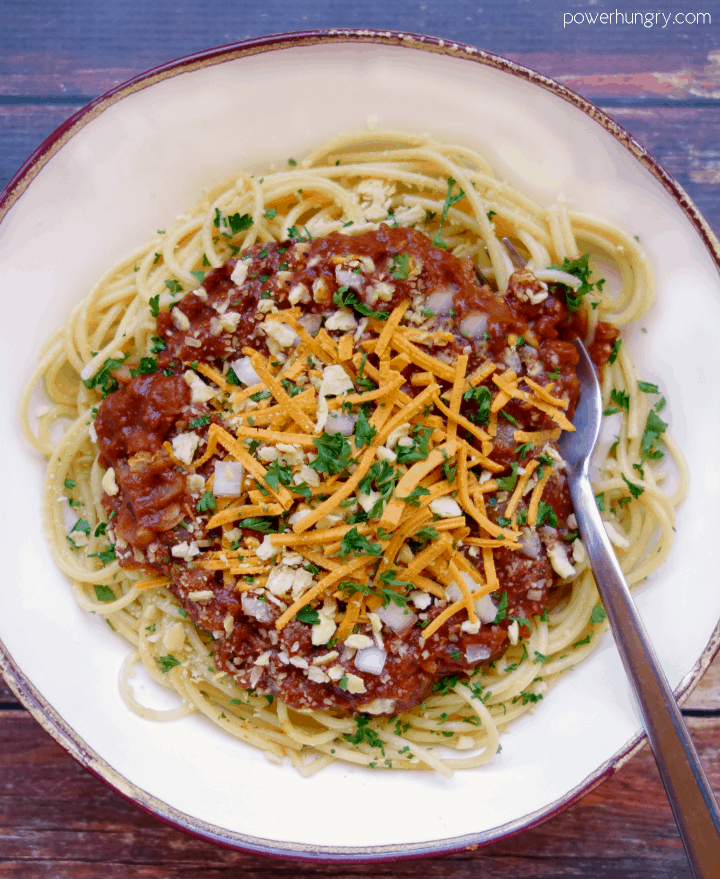 Making a plant-based version was a fun challenge.

I considered using canned beans in place of the ground beef, but the texture wasn’t right, and here’s why:  with Cincinnati chili, the beef is broken down with a spoon as it cooks (in broth, water, or the tomato-broth sauce) until it is very fine (no big pieces, as you might find in traditional chili).  Beans, even if chopped or mashed, made the sauce too starchy, and the skins of the beans put me off.

Split red lentils (readily available these days in the dried bean section of the supermarket), however, are perfect–PERFECT! They break down as they simmer, but maintain just enough toothsome-ness to create a Cincinnati-worthy sauce. You do not think “lentils!” as you eat, just hearty, spicy, scrumptious, meat-y goodness. 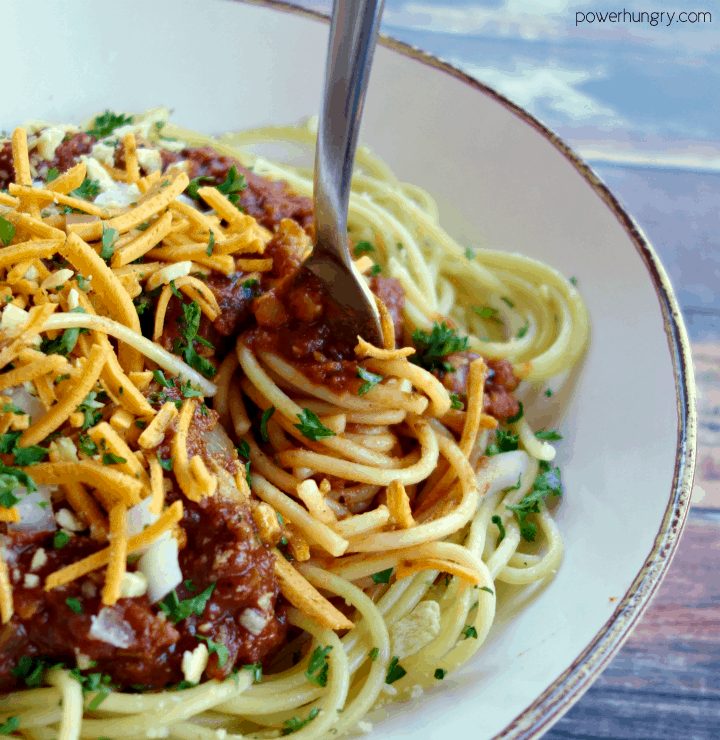 I used chickpea flour spaghetti, which makes the dish both grain-free and gluten-free, but feel free to use the spaghetti that suits your needs (gluten-free, regular, whole grain, etc).

The same is true for the toppings. Cheddar cheese is a classic Cincinnati topping, so use the real thing, or a dairy-free version such as the one below (note that I have no affiliation with the Daiya brand, other than that I like it (it’s tasty and soy-free) and it is readily available and reasonably priced at the supermarket.

You could also go against the grain–or, more accurately, the dairy–and omit it altogether. Purists will balk, but purists will object to a meatless version of the recipe anyway, so do what you like :). 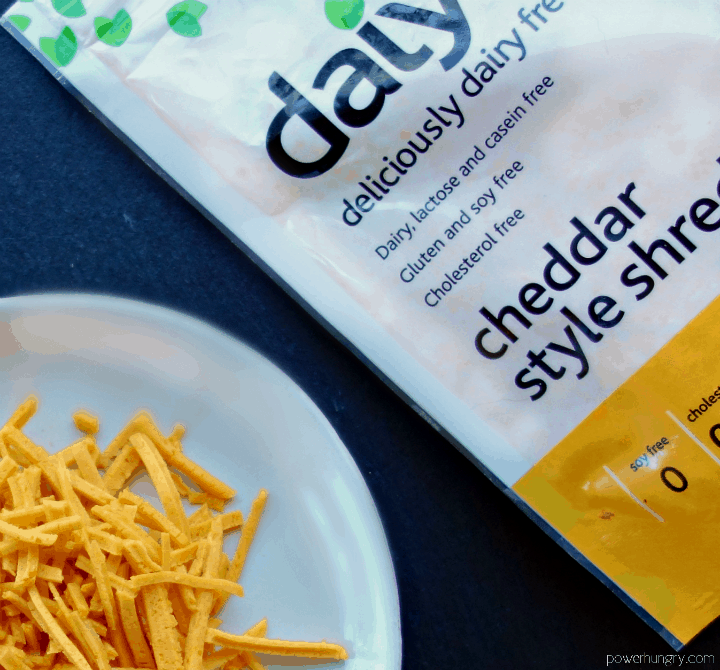 If you want oyster crackers, go for it! 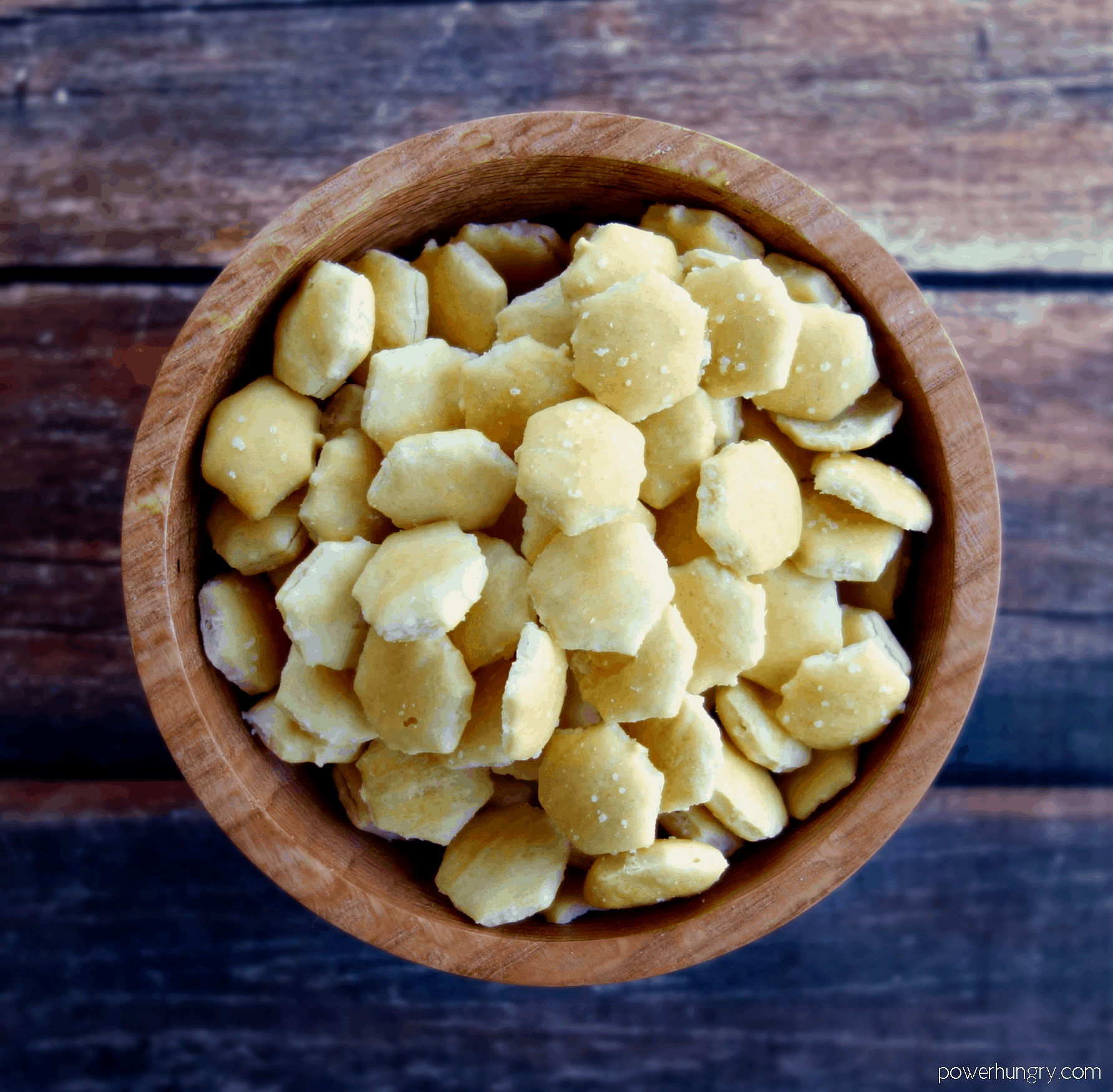 Considering the crackers get crumbled into bits, it is easy to swap in something else in their place, though, such as gluten-free cracker crumbs or gluten-free panko, or even some finely chopped toasted nuts (I realize that these suggestions will likely be considered heretical by traditionalists, but hey, they taste great, and it’s your kitchen!).

My last point of order is this: many Cincinnati chili recipes include instructions that the chili (sauce) mixture must be made at least one day ahead of time before eating.

Yes, the sauce tastes even better on day two (as do most such sauces), but it tastes pretty incredible on day one, too. Considering I usually need dinner for tonight, not tomorrow, and that most of you do, too, I suggest making a double batch for two nights’ worth of meals (or freeze the second half). You’ll thank yourself both sooner and later. 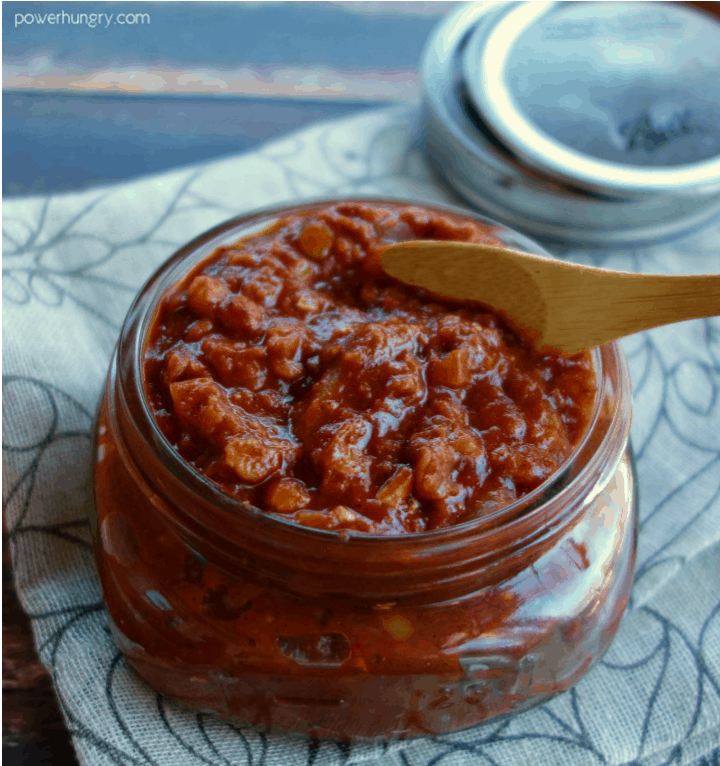 Thanks for the inspiration, Cincinnati!

Storage: Store the leftover chili in an airtight container in the refrigerator for 5 days or the freezer for up to 6 months.

Note: Calories were calculated using chickpea spaghetti and without added toppings (as they are optional).

I made this with my 6 year old after a trip to Cincinnati and we both loved it! So yummy and kid-friendly flavors too. The red lentils are such a clever substitute.

Spot on! As a Cincinnatian who gave up beef a few years ago I can say that this crushed the craving. When reviewing lentil Cincy chili recipes, most called for brown or green, but I prefer the texture of the red lentils for this recipe. The only change I made was using a full cup of lentils and upped the water to 5.5c.

I am flattered to the EXTREME, ZK!!!! Thank you so much for your Cincinnati stamp of approval :)

Being a native Cincinnatian and having worked at both Gold Star and Skyline in my youth, I'd say I'm a pretty good judge of Cincinnati chili and this recipe his the mark! Soooo delicious! I never thought I would be able to indulge in a 5 way again, but you have changed my vegan life, Camilla! Thank you so much for this amazing recipe!!! I even went crazy with it and made carrot dogs and got gluten free buns so we could have vegan cheese coneys! Don't forget the mustard! 😁 Absolutely outstanding recipe!

WOW!!!! Jen, thank you for the incredible comment! This means so much. I have a Cincinatti friend who gave me serious grief about this when I originally posted (granted, she is not vegan :). So getting approval from Cincinatti native + Gold Star and Skyline alum is about the highest praise I could ever dream of, Thanks a million, Jen!!!

The ingredient list is very similar to what I put in my baked beans. Not exact, but similar. So I know this is going to be good! Thank you in advance for our dinner tonight.