Truly crunchy oil-free crispy roasted chickpeas! A healthy high-protein snack, they can be kept plain or seasoned any way that you like with herbs and spices. 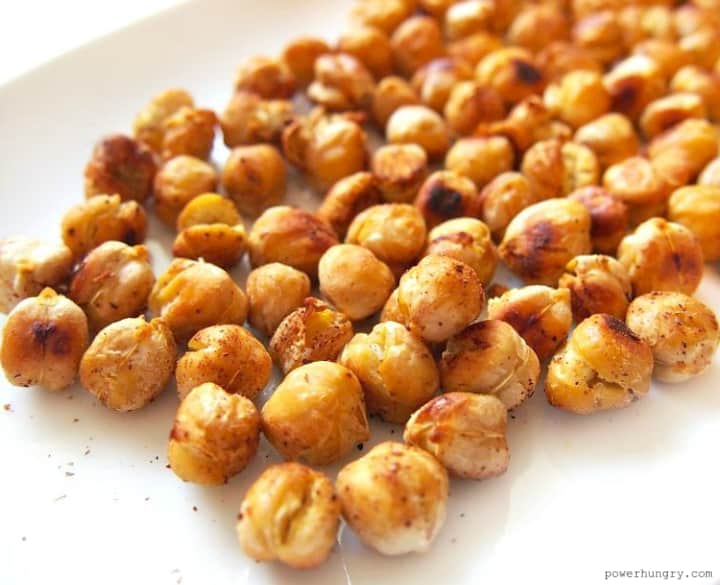 I have known about roasted chickpeas since I was seven years old. I was obsessed with the All of a Kind Family series of books by Sydney Taylor and Helen John; they are the Jewish, New York City-based, early 20th century equivalent of the Laura Ingalls Wilder books. I couldn’t get enough, and re-read each volume several times over.

All of the five daughters’ adventures–laundry days, visits to the NYC public library, swimming at Coney Island– mesmerized me, but it was the vivid descriptions of the food, including the rituals for making, serving, celebrating, and eating it, that hooked me. I was dazzled by sizzling latkes, cinnamon babkes, chicken soup with matzoh dumplings (made with the chicken mama plucked herself), and animal crackers, gingersnaps, and lemon drops in waxed bags from the neighborhood 5 & dime. I was ready for Passover, Hanukkah, and a move to New York.

One of the nibbles that piqued my interest in particular was roasted chickpeas. In the first volume of the series, the girls are granted a special treat: a visit to the food markets for the weekly shopping. Along the way, the youngest daughter clamors for one of her favorite treats, sold by a street monger: roasted, salted chickpeas, scooped warm into a paper cone. She shares some with her sisters, and they swoon over the tender-crunchy, nutty-salty flavor.

But what on earth are chickpeas, I wondered? I asked my mother.

“It’s another word for garbanzo beans,” she informed me.

Oh. Hmm. I knew garbanzo beans. They were a regular feature in soups and salads at our house. I liked them as much as I liked any bean, but there was the rub: they were just beans. Why would anyone agitate for a cone full of beans?

Two decades later, I have the answer.

Chickpeas, salt, perhaps some herbs and spices, and a brief spell in a hot oven…it sounds deceptively simple.

Oh. My. Goodness. Crunchy-crispy, hearty, healthy, and cheap to boot. The All of Kind Family clamor was clarified in the first nibble. I have found a new life-long snack. Do give them a try. I’m off to work on paper cone construction for my next batch. 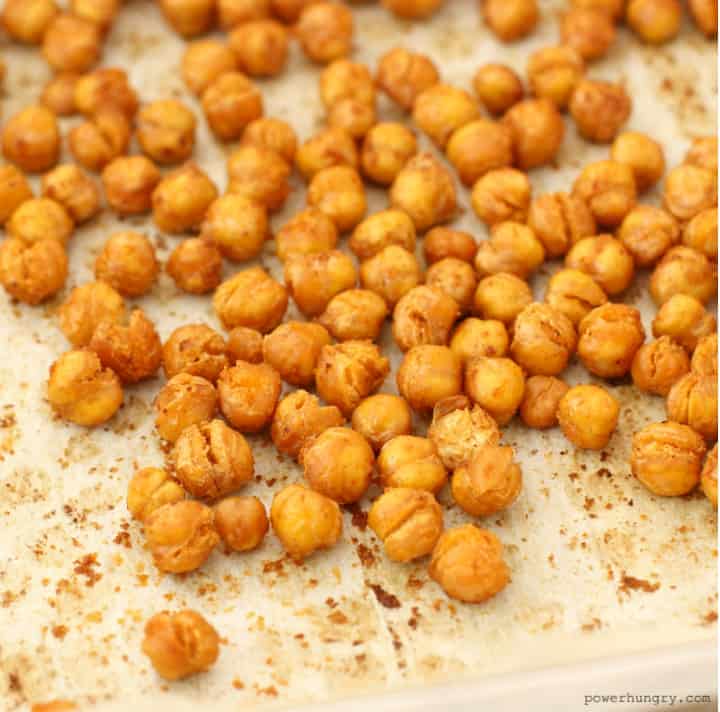 Tip: After making a few batches, I want to stress how important it is to pat dry the chickpeas after draining and rinsing them; the goal is to get a good crunch to the chickpeas, and they will not achieve it if they are damp.

OMG, I own every one of those books!!!! And that was exactly what made me want to try chickpeas too!! I just roasted some in a small cast iron pan (try them that way, you'll love them) and wanted to leave you a comment. Thank you for your recipe!

I've never thought of roasting them...I have done them on a stovetop with some olive oil and fresh minced garlic, and they are one of my kids' most requested food-we call them "Tater Balls", they also like watching them cook as they sputter and pop! Thanks for the roasting idea, gonna try it!

I am interested in making this as well although what I don't like about chickpeas is the skin.

I have been wanting to make these. A nice summer snack.

I went straight to the cupboard and made a batch of these. I sprinkled them with a little vindaloo seasoning. Very satisfying! I think I'll use these for a salad topping too.