In this final week before Thanksgiving, I’ve decided to share three incredible pie crust recipes that will make your baking easier than ever.

A Pie Crust for Almost Everyone

This pie crust just so happens to be: 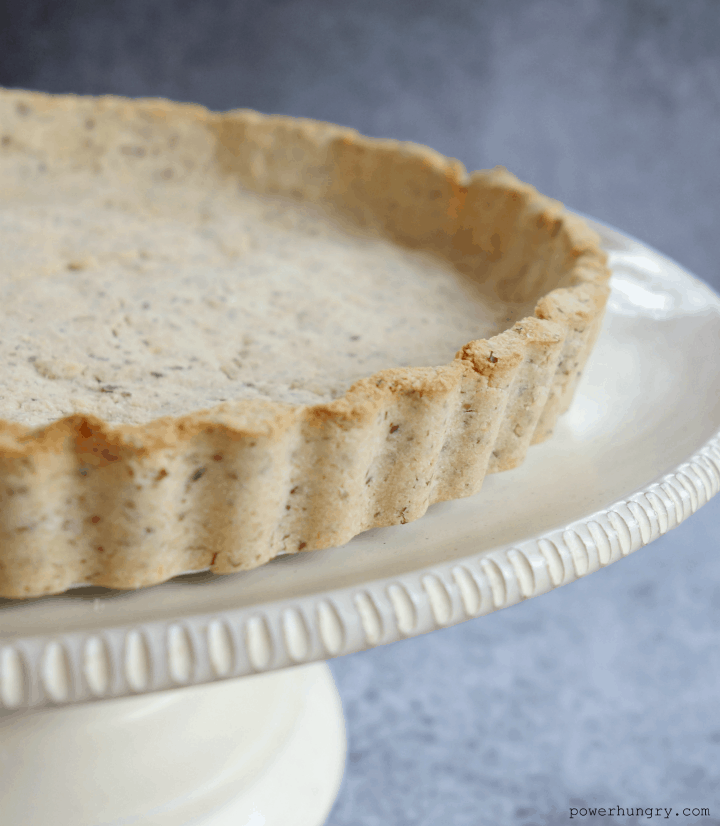 When I say fuss-free, I mean it. Think  2 to 3 minutes of measuring and mixing, followed by another minute of pressing into the pie pan or tart tin.

No chilling. No rolling. No worries about over-working the dough. No pie weights. Nada.

But true love for this crust peaks with the tasting: it has a delicate, nutty flavor that complements any filling, sweet or savory, and the texture is tender and crisp, every time.

I want to make sure you can use this crust in all of your favorite recipes, so I am providing instructions for unbaked crusts (i.e., for recipes that call for adding the filling to an unbaked crust before baking): 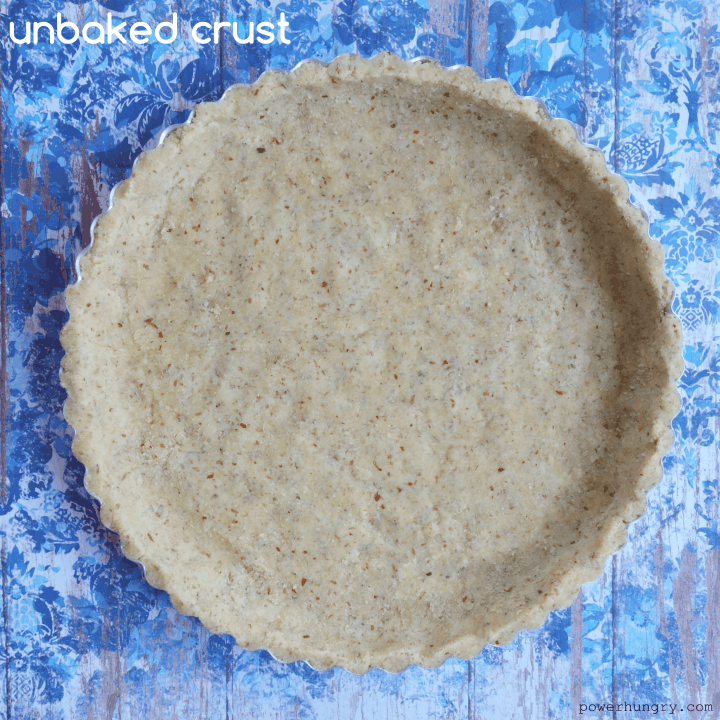 Par-baked crusts, sometimes called a 10-minute blind bake (i.e., recipes that call for adding the filling to a par-baked crust before baking):

And also fully-baked crusts, for cream pies and other no-bake fillings: 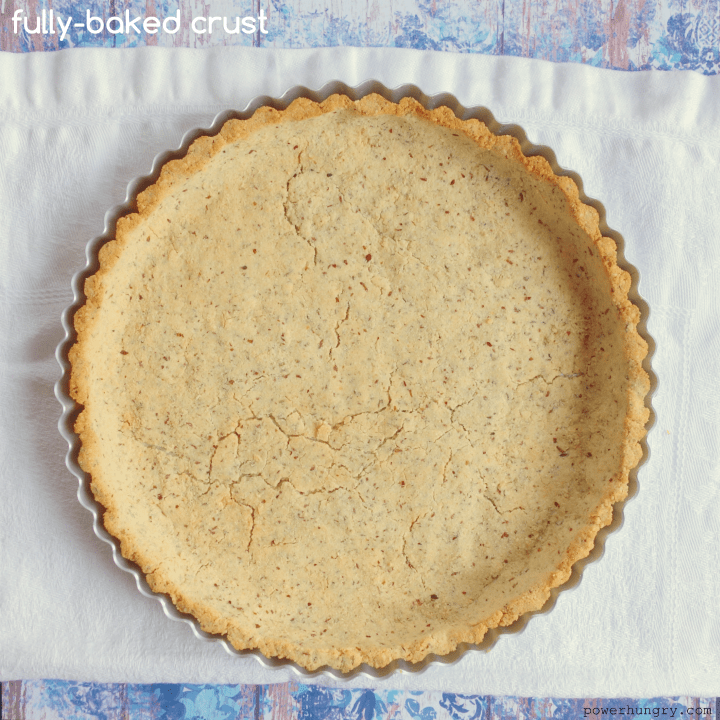 The crust works best with coconut oil, ghee or butter. It is such a versatile crust that I decided to try it with a neutral vegetable oil (avocado oil). It was acceptable, but definitely not as good; the texture is less tender and the crust seemed slightly greasy. In short, I would advise against it.

Subbing other nut or seed flours for the almond flour is another matter. Use hazelnut, pecan, walnut, or pepita, they will all work beautifully in place of the almond flour!

If you like, add spices and/or a hint of sweetness to the crust for sweet fillings, or finely chopped herbs or savory spices for savory fillings. Have fun experimenting, and let me know what you make! 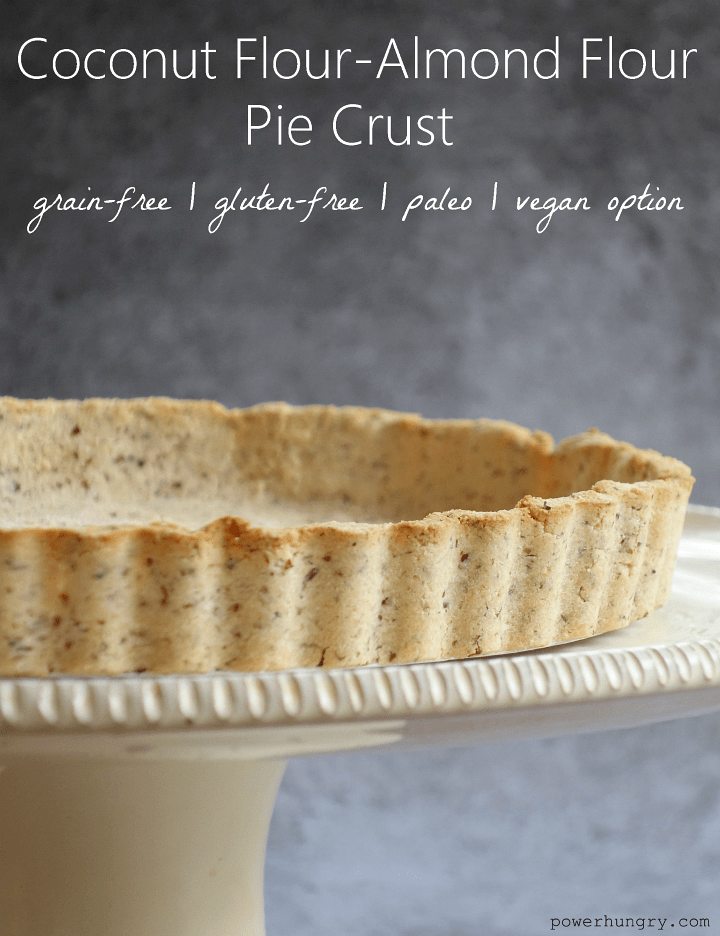 Eggs Options: If you do not need the recipe to be vegan, replace the 2 flax eggs (water + flax) in step 1 with 2 large eggs.

Net Carbs: The crust has 2.2 net carbs per serving

Could these be frozen? For time saving purposes, I like to have a few shells already prepared and grab them as needed for various recipes.

Hi Julie, I know that I have frozen this crust in the past, it came out great 😊

Guess I should add I used egg instead!

I was skeptical at first.....Easy pie crust you say?! (never had any luck with homemade gluten pie crusts so why is gluten free gonna be any different). But holy shit this came out so nice. Followed the recipe to a T and the crust was soft yet fluffy and held my sweet potato pie with ease.

Only negative thing was I didn’t have enough dough to cover all the way up the sides of my glass dish. Next time I’m gonna double the recipe. Kudos to you because this is fantastic!!!!

Amber, I am so happy you loved this so much! Whoohoo! Oh my Gouda, sweet potato pie...yum! I cannot wait for it to cool down a little more here so I can go full tilt with fall baking :)

Thanks for sharing this pie crust recipe, I made it today & filled it with banana keto cream filling. The crust baked nicely & held up well once filled & sliced. I misread the instructions & mixed all dry then added the wet, not pre making the flax egg didn’t seem to be a problem so very forgiving. It tasted nice, the coconut was the prominent flavour.

Can’t wait to try this! Would this work for a quiche possibly?!

Yes, should work great with a quiche, Karissa :)