Grain-free  & vegan chickpea flour cornbread stuffing, which is simple to prepare, healthy, and incredibly delicious! The no-corn cornbread is a minor holiday miracle.

I know I am not alone when I say that what I love most about Thanksgiving is the stuffing. Or dressing, as my Arkansas-born husband corrects me (but my dressing was in fact stuffed into something other than a baking dish, so we can both be correct on this one :)).

I am also an unapologetic stuffing snob. Most importantly, I do not like gray, gooey stuffing (shudder). I prefer stuffing with color and texture, especially from plenty of fresh, sautéed vegetables. I’m also partial to a hint of sweetness and an even balance between tenderness and crispness.

But most of all, good stuffing needs good bread. For example, my No-Corn Cornbread. It’s made with chickpea flour, a bit of pumpkin, and zero corn.

It just so happens to make a d%#*-good stuffing that is easy, healthy, gorgeous, and all-around amazing! 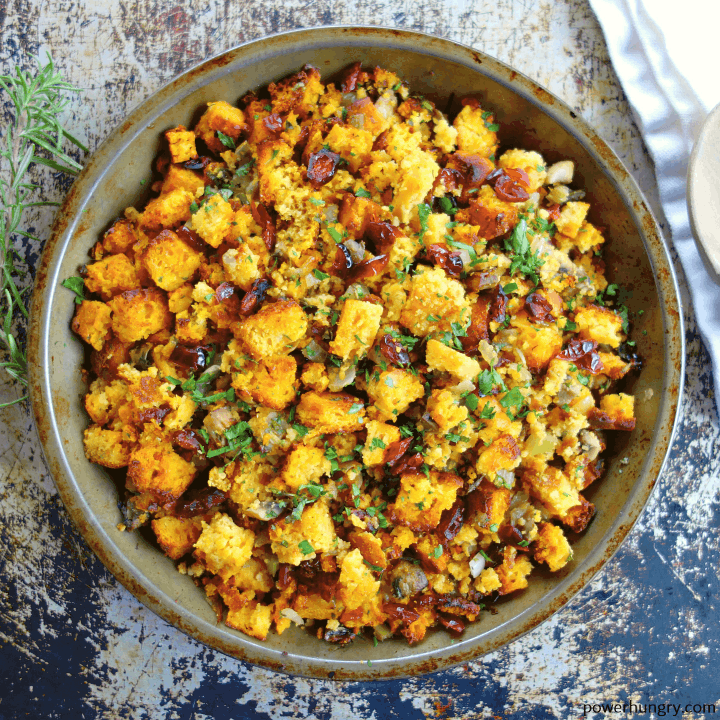 This incredible stuffing has a minimal number of fresh, flavorful ingredients: onions, celery, mushrooms, a bit of olive oil for sautéing,  vegetable broth, dried cranberries, and herbs (rosemary and parsley).

I love the fresh, woodsy flavor of rosemary, but if your prefer the more traditional flavor of sage, you can use it instead. While on the subject of subs, you can add or subtract other ingredients here, too, and make this recipe your own. Do, however, keep the ratio of cornbread and liquid the same. 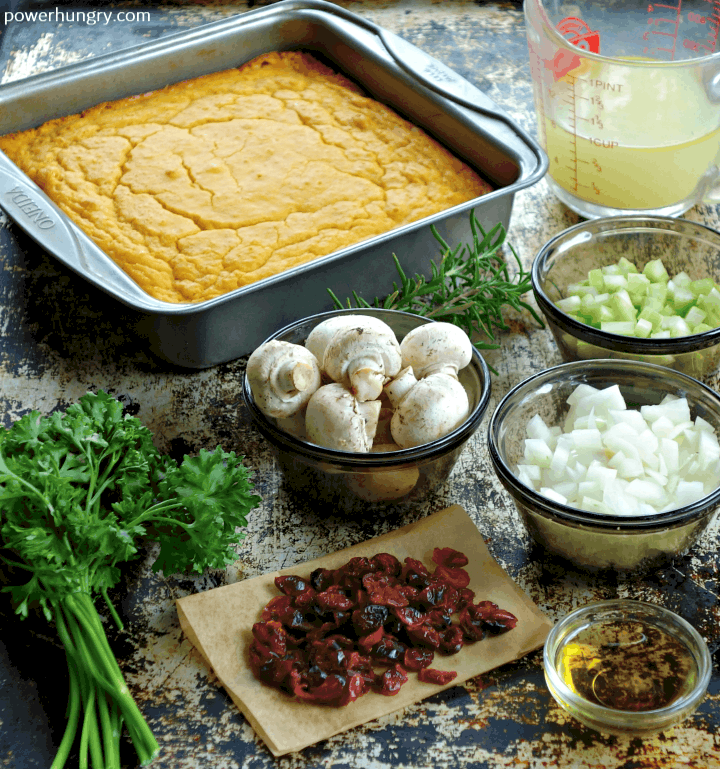 Begin with a Batch of Chickpea Flour Cornbread

As mentioned above, this stuffing starts with great bread. You can make the No-Corn Cornbread a day or more ahead of time (store in the refrigerator or freeze). When you are ready to make the stuffing, cut it into small cubes and toast in the oven for a short spell to dry it out. This will lead to plenty of crispy bits in the finished stuffing.

Note: you can complete this step a day ahead. 🙂 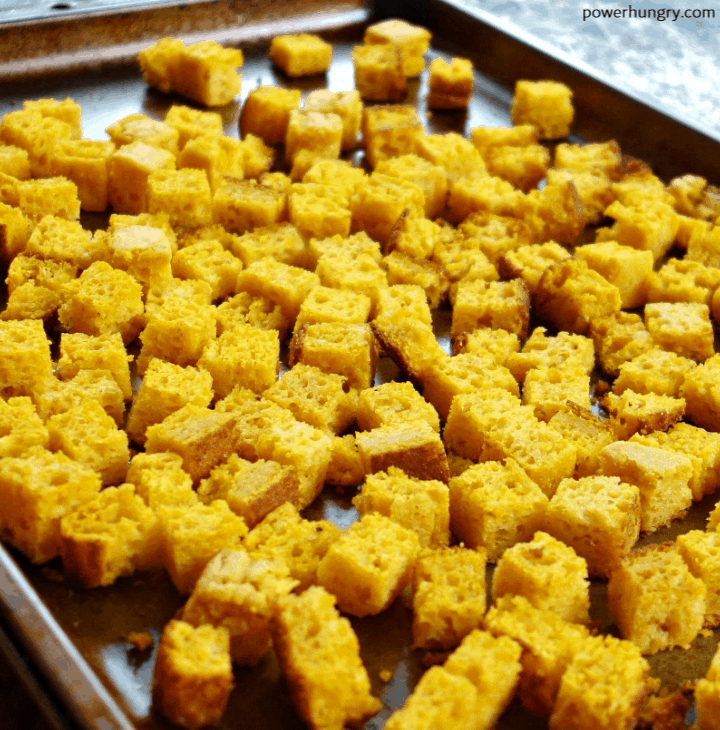 I kept the vegetables traditional: lots of onion and celery, plus mushrooms for their umami depth of flavor. The seasonings? Nothing more than salt and pepper. Sautéing the vegetables until they are very soft brings out ample amounts of delicious goodness. 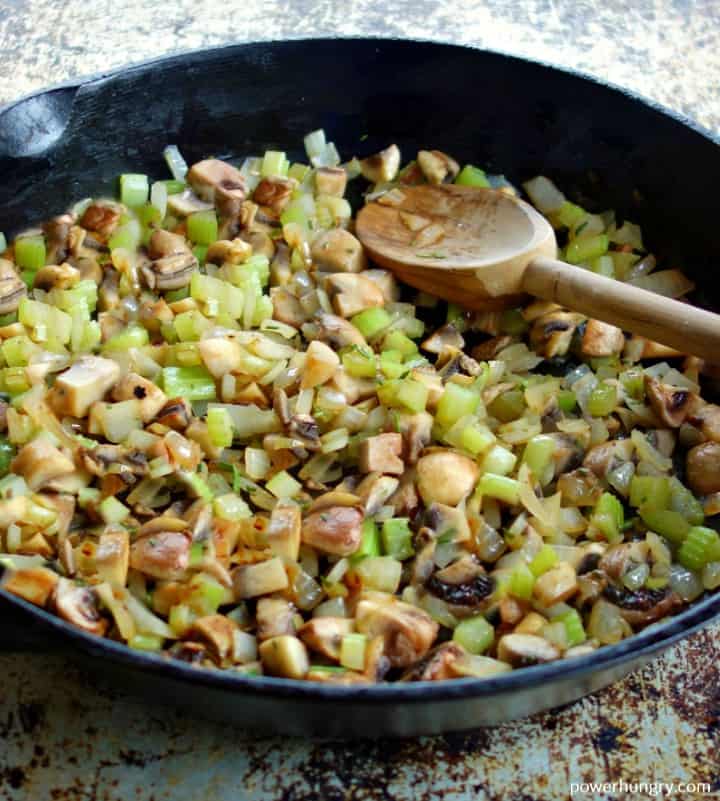 Combine the Stuffing Ingredients in a Bowl

If you were hoping for about 10 more complicated steps, and umpteen more ingredients, you will be disappointed, because you’re almost done!

All that is left is to combine the toasted bread and vegetables in a large bowl along with the rosemary, cranberries, parsley, and broth. 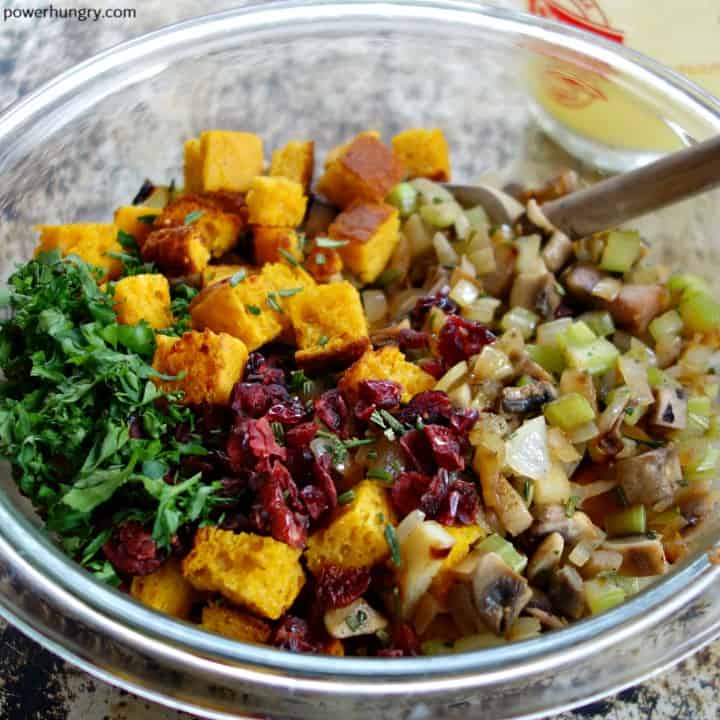 Now pile the stuffing into dishes to bake. You can use one large dish (e.g., 13×9), two 9-inch pie pans or square dishes or, or even individual ramekins. Give the dish or dishes a spritz of cooking spray, or rub with oil, to prevent the stuffing from sticking.

Note: You can prepare the stuffing up to this point a full day in advance. Cover and refrigerate until ready to bake

Tightly cover the dish(es) with foil for the first part of the bake, and then uncover and bake a short while longer to crisp the top.

Prepare yourself for all of the oohs, aahs, and wows! 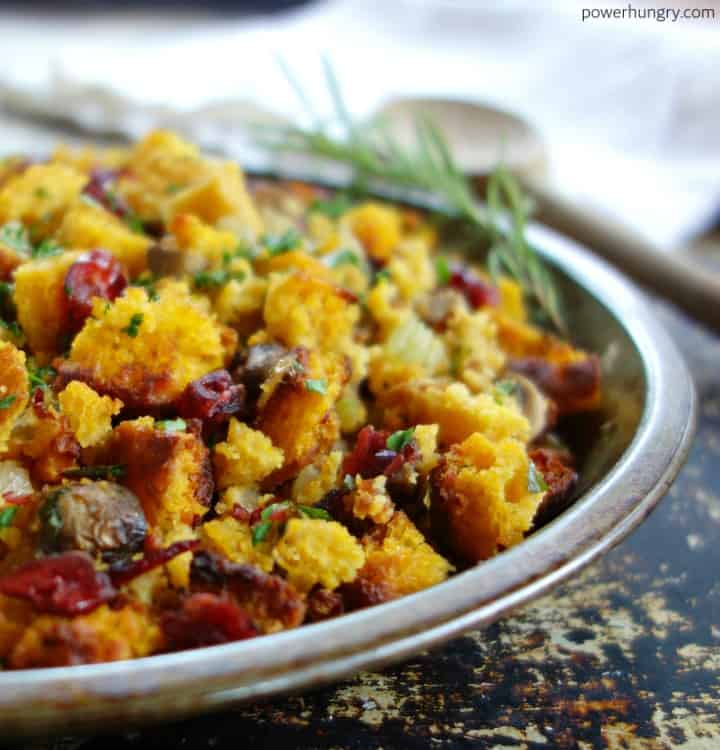 I hope you love this stuffing as much as my family does! 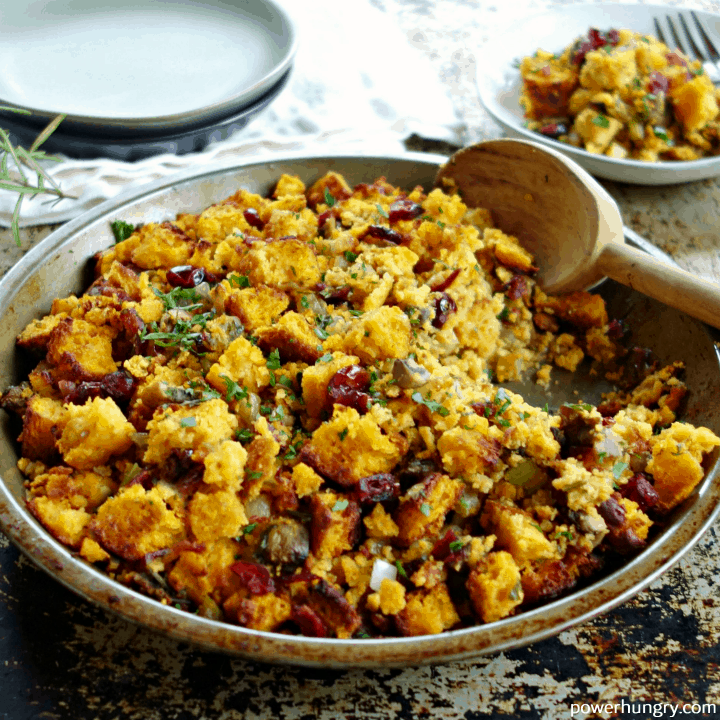 Storage: Store cooled stuffing in an airtight container in the refrigerator for 2 days or the freezer for up to 6 months. 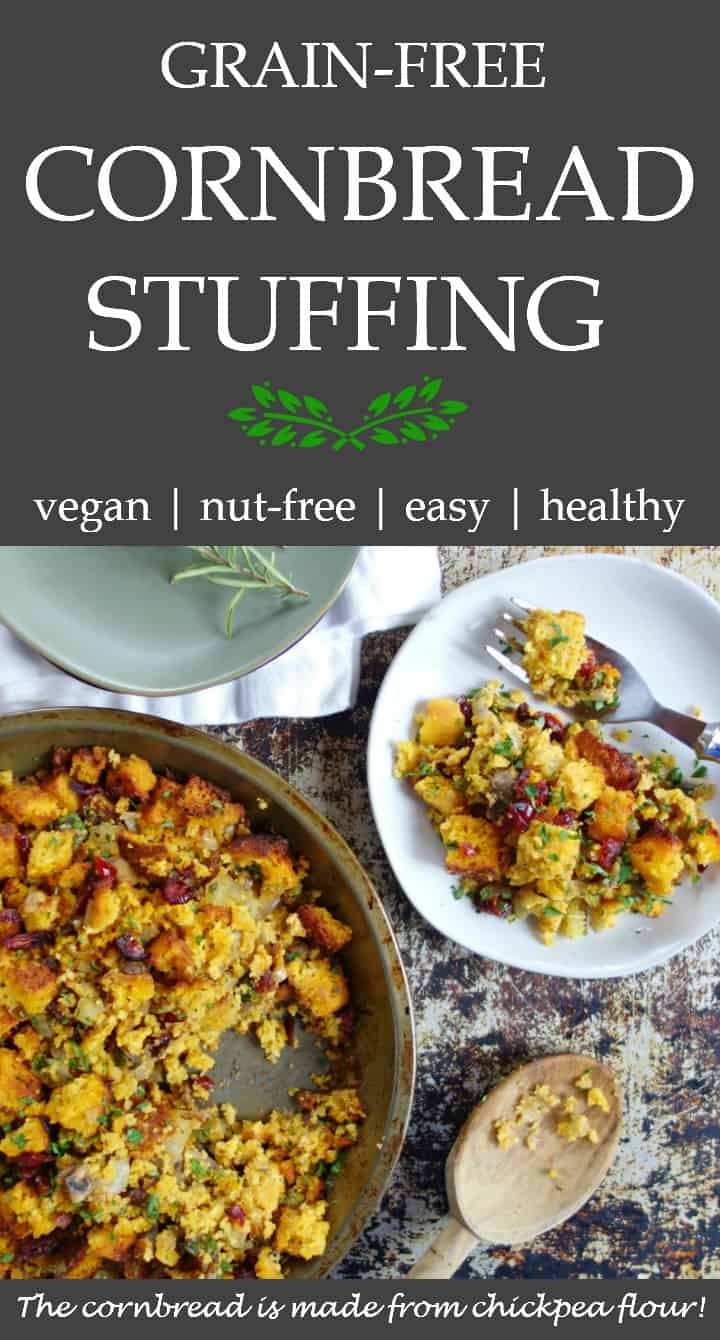 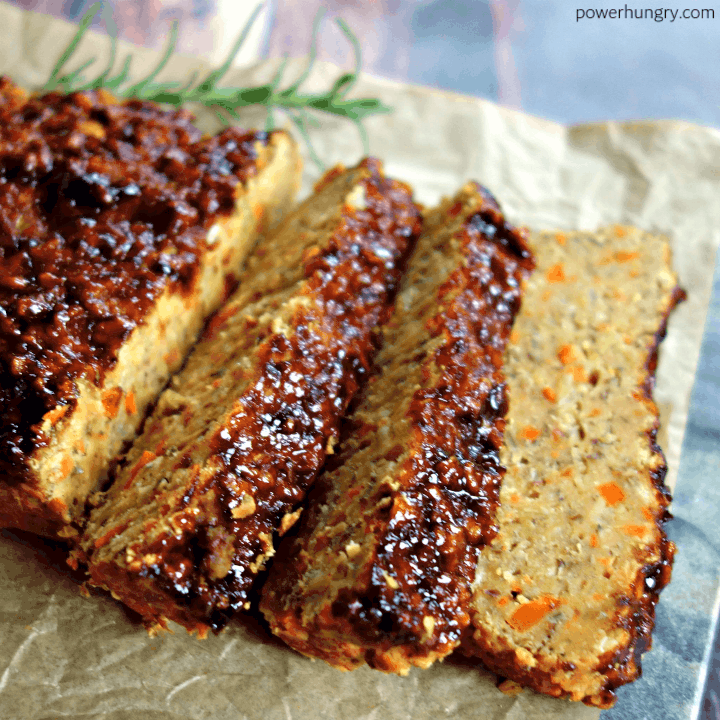 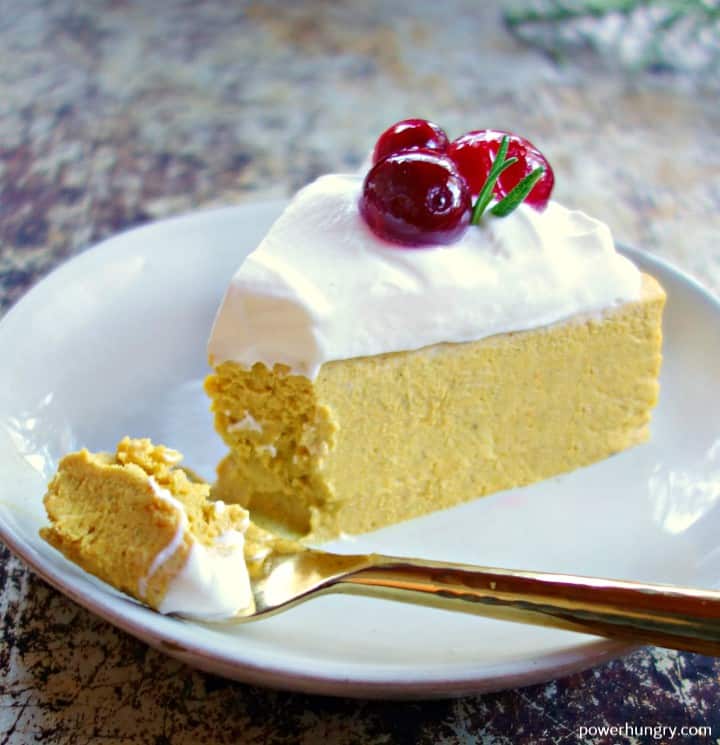