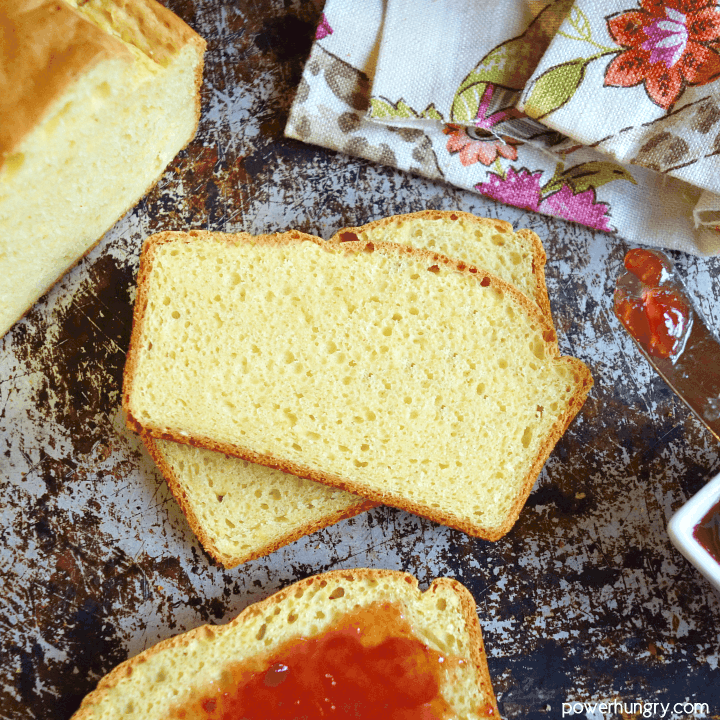 Despite being golden, this beautiful bread is pretty darn close to an all-purpose flour country-style white bread, both in taste and texture. It is wholesome and flavorful, but neutral, too (no chickpea taste, making it great for both sweet and savory toppings). It is so darn good!

For proof, I offer my ever-skeptical, reticent husband’s assessment of his inaugural slice:

I could not ask for a better endorsement. 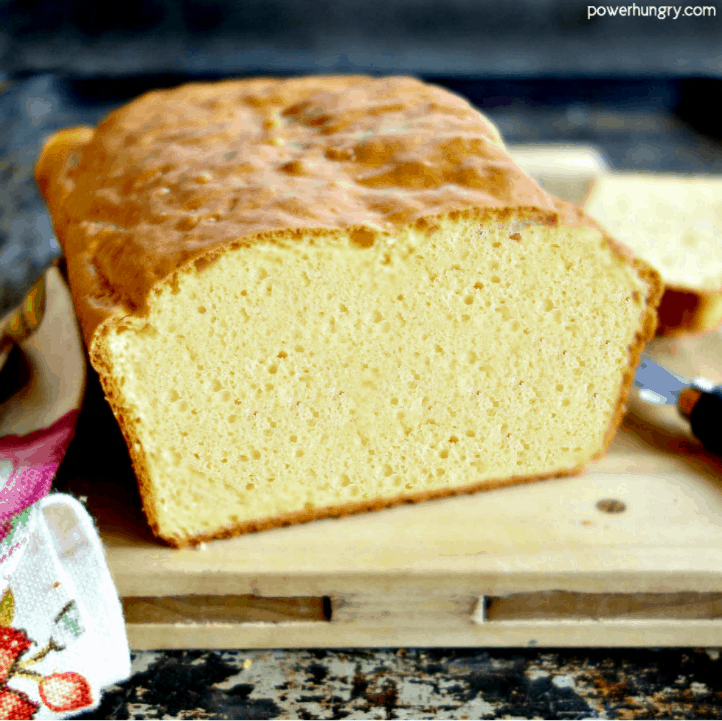 What makes this bread work is a combination of chickpea flour and almond flour.

I love both flours, but my experiments combining the two have been limited. What an oversight on my part! After several test loaves, I quickly had my new favorite bread.

Use Almond Flour, not Almond Meal

A caveat before you begin: you need to use blanched (superfine, skins removed before grinding) almond flour.

I made this two times with almond meal and the loaf was heavy and had a solid line of dense, undercooked dough at the bottom of the loaf.

Back to making the bread, which is incredibly simple. First, combine the dry ingredients (chickpea flour, almond flour, baking powder, and (optional) salt).

If you have a kitchen scale, I strongly recommend measuring the flours by weight rather than cups. It makes a significant difference in achieving accurate, favorable results for baking in general, and alternative, minimalist baking in particular.

Add the wet ingredients (water!), whisking until completely blended. The batter will look similar in thickness to a traditional pancake batter.

The batter will form bubbles quickly (from the reaction between the water and baking powder), so don’t waste time (e.g., by taking photos! :)) getting it into a greased pan and then a preheated oven.

Note that I did not line the pan with parchment paper. Because the bread begins as a fairly wet batter, it browns better (no soggy bottom!) and produces a lovely crust when baked directly in the pan. 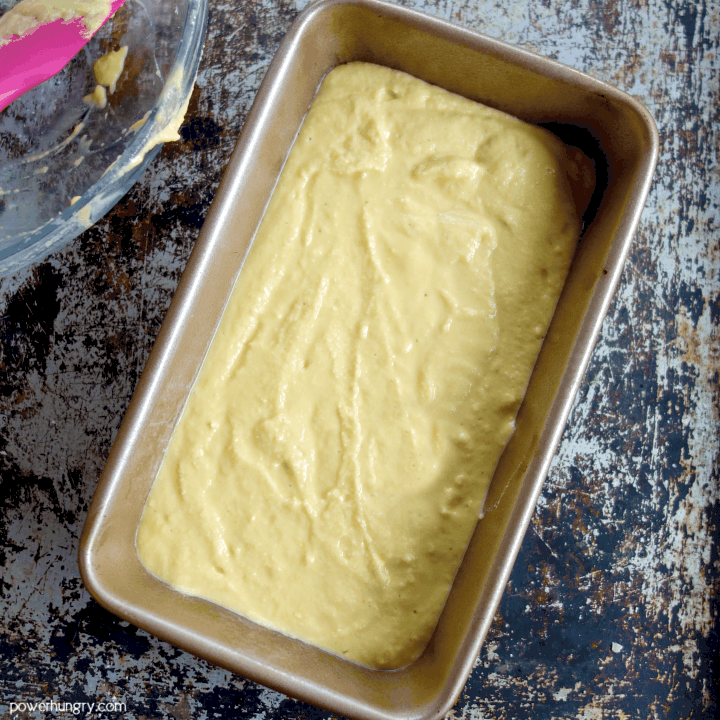 Bake the bread at 400F for roughly 40 to 45 minutes until risen and golden. 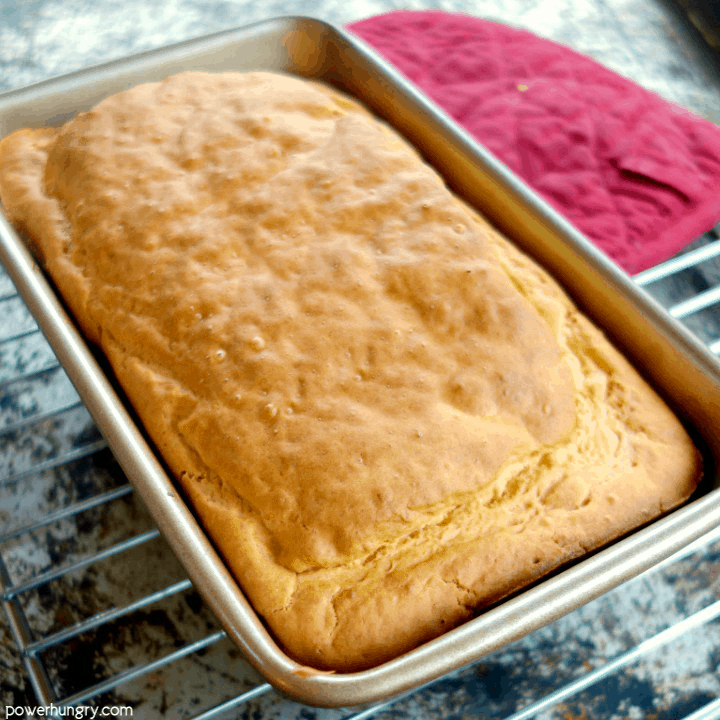 Allow the bread to cool in the pan on a cooling rack for 20 minutes. Run a butter knife around the edge of the pan to loosen; remove the bread and let cool completely before slicing.

The bread can be sliced ultrathin, thick, or anywhere in between.

If you do not love the flavor of chickpea flour, this bread will thrill you; it has a neutral bread flavor! Using baking powder instead of baking soda further guarantees a mild-flavored, anytime, go with anything, bread. 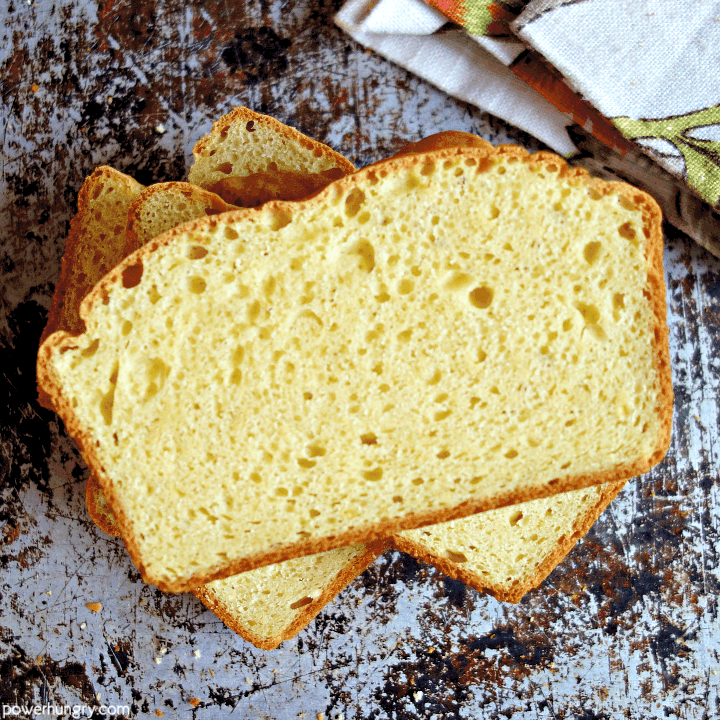 Toast it, top it, and most of all, gobble it! 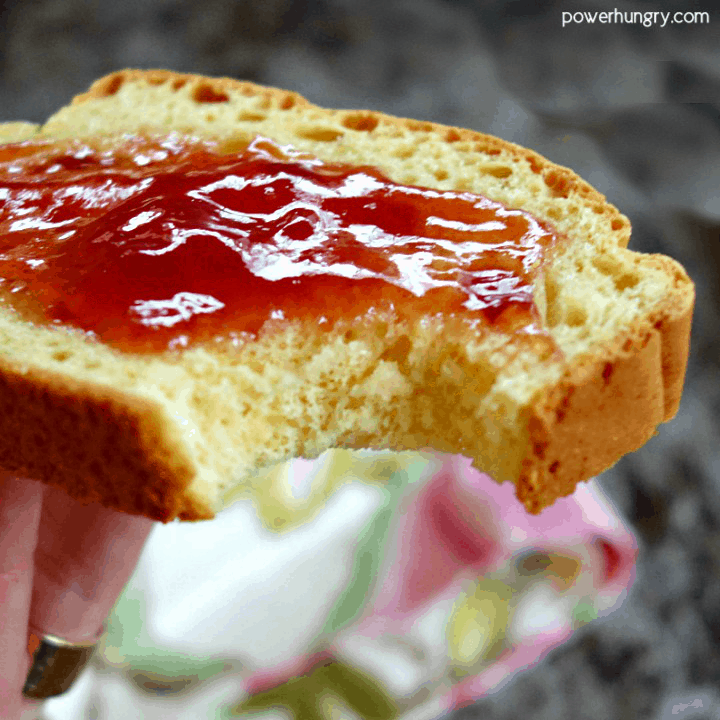 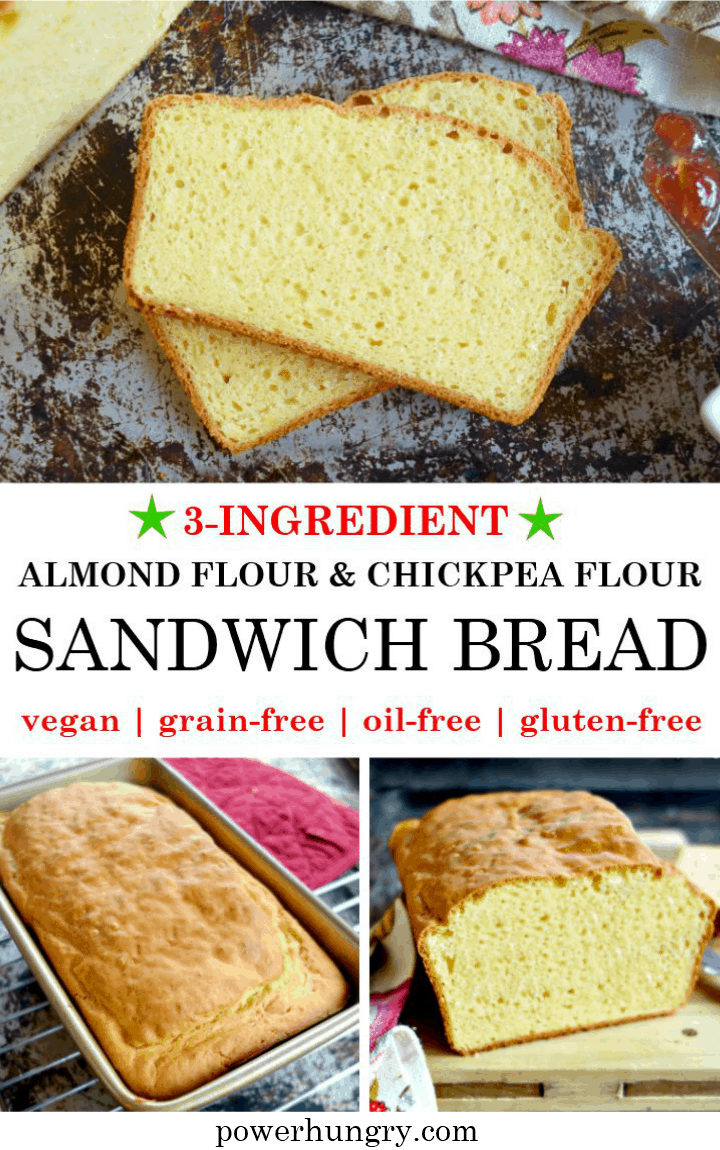 Storage: Store the completely cooled bread in an airtight container at room temperature for 1 day, the refrigerator for 1 week, or the freezer for up to 6 months. If freezing, consider pre-slicing the bread (so that you can remove one or a few slices at a time).

Q: Can I use something else to replace the chickpea flour and/or almond flour? A: No, not without a substantial amount of experimentation and fine-tuning.

Can I use lemon juice or any plant based thing as the substitute for baking powder?

Hi Aakanksha, Alas, no, you definitely need a leavening agent to make things rise (or eggs, if you are not vegan).

Baking powder is plant based by vegan terms. You can make your own, too, to control the ingredients (baking soda, cream of tartar, and tapioca starch).

Made it exactly as the recipe says. with all freshly-bought ingredients. The top burned but I put a piece of foil over it and continued to bake it. It tastes very strongly of chickpea, a bit less of almond, and has an unpleasant consistency. My whole house smells of something rather nasty. Total fail. It does look a bit like the photo, but is not worth eating.

Made last night but for some reason it didn’t work 😫 it’s dense yet it crumbles, I used new baking powder (even did the water test before) and it didn’t rise. The chickpea flavour is intense, don’t know how everything went wrong 😱

@Diana,sift the chickpea flour and measure it afterwards. This made a HUGE difference for me

Hi Diana, Oh no, I am so sorry it did not turn out for you.May I ask: did you measure with cups or by weight? If you used cups, it sounds like there might have been too much flour, which can really throw off the ratios (it definitely sounds like there was too much chickpea flour. This bread does not have a strong chickpea flour flavor when I make it). If using cups, very lightly spoon the flour into the measuring cups and level with a knife.

I tried this bread 5 times and it never rose. Yes I went out and bought the scale. I was soooo careful rasuring everthing but no luck. HELP

@LeeBurr, sift the chickpea flour and measure it afterwards. This made a HUGE difference for me

Have you done an independent test of your baking powder? That is most likely the culprit since it is the sole ingredient that makes the bread rise.

Sounds perfect, but unfortunately, with lupus, I cannot use chickpea flour. Is there any substitute? Thank you!

Hi Jay! Oh shoot, I am so sorry that chickpea flour is out. Tis particular loaf will not work with any other subs. Which flours can you eat? If you search for bread or sandwich bread on my site, I have some alternatives that (I hope) might work for you