Easy-to-make, nutrient-packed, double chocolate chickpea flour banana bread tastes so decadent! No one will believe that it is vegan, grain-free and gluten-free. 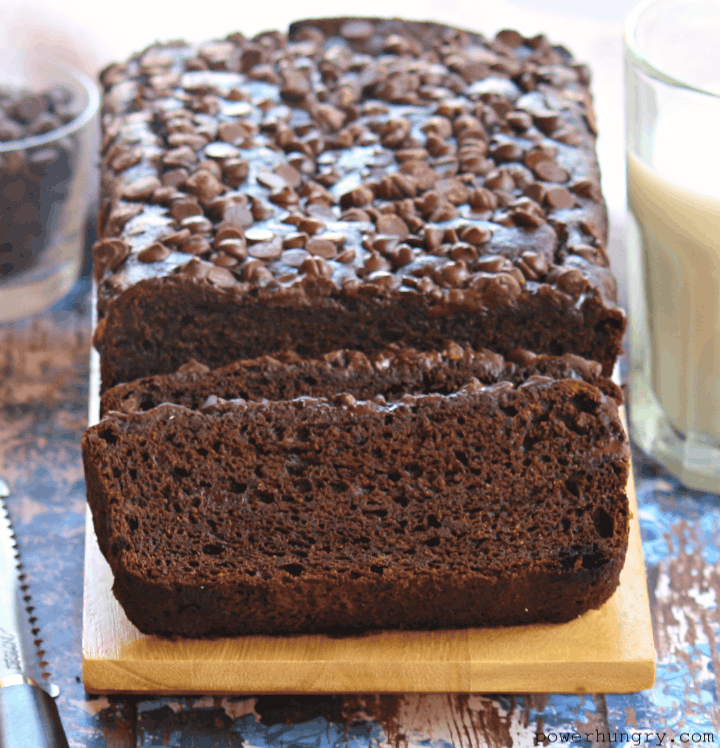 We keep buying bananas. And eating them. But regardless of our family’s affection for the fruit, we always end up with plenty of brown ones, too.

If so, I’ve got yet another use for them: Double Chocolate Chickpea Flour Banana Bread! 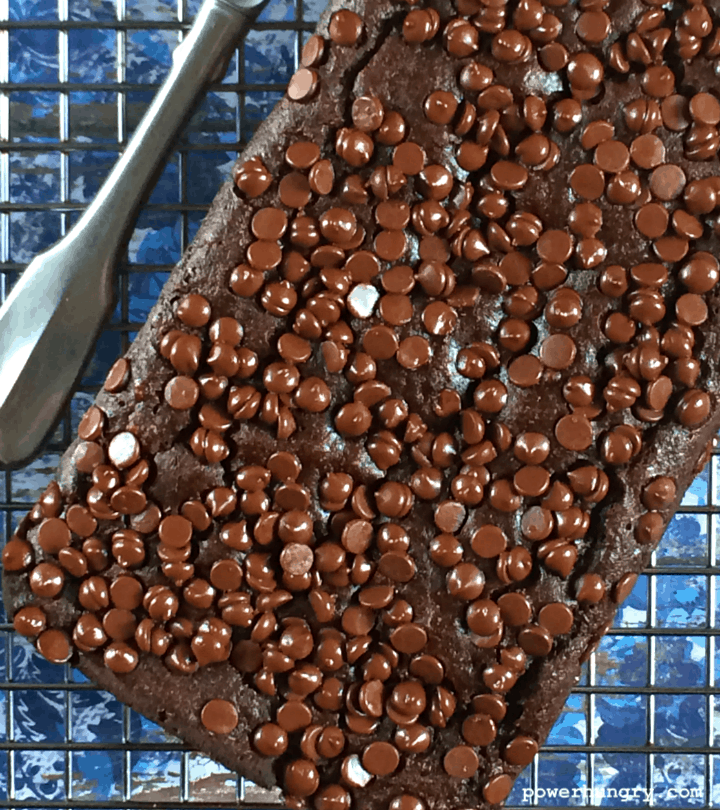 This is a riff on two recipes: (1) my chickpea flour banana bread, and (2) a chocolate banana bread recipe, clipped from a magazine ad, that I used to make often when I was a poor graduate student.

I make the former often, but it’s been many years since I have made, or even looked at, the chocolate banana bread recipe.

Chocolate Banana Bread with a Fraction of the Sugar

I made it so often because I almost always had the ingredients on hand, and it was invariably gobbled up at get-togethers and potlucks (granted, the other offerings were invariably hummus, pizza or chips). I remembered it as being rich and chocolate-y, with a pleasant banana flavor, so I was surprised when I unearthed the recipe and realized that much of the flavor was just sugar.

Specifically 1 and 1/4 cups of sugar for a single loaf. Moreover, the recipe calls for a measly 1/4 cup of cocoa powder and 2/3 cup vegetable oil. Also, I had not noticed until now, but the recipe indicates that the entire loaf serves 6 to 8! Perhaps I tore the recipe out of Hungry Lumberjacks Digest.

Hence, while the memory of that chocolate banana bread sparked the idea for this recipe, it is definitely my fresh, new take on what a very chocolate take on banana bread can be.

Use Plenty of Cocoa Powder for a Rich Chocolate Taste

The bread derives its depth of flavor from a generous 1/2 cup of unsweetened cocoa powder. It’s rich, but also balanced thanks to 1-1/2 cups of banana, which do triple duty, delivering moisture, sweetness and plenty of banana flavor (banana bread should taste like banana bread, right?).

Two tablespoons of miniature semisweet chocolate chips sprinkled over the top delivers decadence in every bite while still keeping this bread in the universe of healthy breakfasts and snacks.

Last, if you have had any problem convincing anyone of the wonders of chickpea flour (yourself included), this is an excellent recipe for changing hearts, minds, and palates. Why? Because there is zero indication of beans. Zero. No one who has tasted this bread has ever had a clue that this is a healthy recipe, let alone a bean-based one.

Storage: Store the cooled bread in an airtight container at cool room temperature for 1 day, the refrigerator for 1 week, or the freezer for up to 6 months.

Oil-Free Option: To Make the bread oil-free, replace the oil with 3 additional tablespoons of water or mashed banana.

Hi Camilla! Love your recipes!! I have so many saved already. This I will bake later today and turn part of it into cake pops covered in white chocolate. 😋

A tip for everyone out there, that might be a little hesitant to use chickpea flour in sweet recipes, is to toast the chickpea flour before using it, it reduces the chickpea flavour. (Perhaps you have already mentioned it somewhere.) I carefully toast the whole bag of flour, let it cool until completely cool and pour into a glass jar that I store in the fridge. That way I always have it ready for when I want to bake. :)

Another absolutely exceptional recipe by Camilla! An easy, healthy recipe that certainly satisfied my intense chocolate craving and allowed me to use my ripe bananas.

I just tried this and loved it! The loaf is so moist and yummy - the banana flavor is just right! I am definitely doing this on a weekly basis for my morning pre-run fuel. Thank you!

Delicious! Used a mix of dark chocolate and mini chips on top. 😊