Chickpea flour naan is the vegan, grain-free, yeast-free & gluten-free flatbread you have been looking for! Make it in minutes on the stovetop and serve warm alongside any and all of your favorite dinners and lunches.

Make Naan At Home, with Ease

Have you ever made naan?

I love to eat it, but only starting making it last year when it was hard to get out and shop. And guess what: it is soooo simple (no Tandoor oven required, just a hot skillet and a stovetop)!

Here’s some more good news: I’ve come up with a quick and easy vegan, grain-free version of naan made with chickpea flour. It  is absolutely scrumptious (even more so if you and some garlic). You can make it in minutes, too, with nothing more than a bowl, a mixing spoon or spatula, and the aforementioned skillet. That’s (always) my kind of bread.

This filling flatbread is nourishing, satisfying, and all of the following, too:

Ready to make a batch?

The ingredients for this hearty naan are minimal. I tried making the naan with even fewer ingredients (e.g., chickpea flour, water, baking powder or soda) but, oy vey: the results were crumbly, hard and decidedly not naan. Several rounds–and a select number of key additions– later, I landed on the right combination of components.

Here is what you will need:

How to Make Chickpea Flour Naan

Before mixing the dry ingredients, combine the nondairy milk and lemon juice in a small bowl. Let the mixture stand for 5 minutes to curdle. The result is a nondairy buttermilk, which adds to the flavor and naan.

I tried making this with water in place of the milk in earlier testing batches. The naan still “works,” but the milk version is significantly better in terms of tenderness and flavor.

This is a yeast-free recipe; hence the dough comes together in a minute’s time!

In a medium mixing bowl, whisk the chickpea flour, whole psyllium husks, baking powder, salt, and baking soda. If you want to make this garlic naan, stir in the (optional) garlic powder as well.

Add the nondairy milk mixture and the oil to the dry ingredients. Mix, scraping the sides of the bowl, until a thick cohesive dough forms. Let it stand for a minute or two to allow the psyllium to absorb the liquid. The result is light, springy dough.

Divide the dough into 3 equal portions (you can use your kitchen scale, or just eyeball it). Using your hands, roll each portion into a ball and place on a well-floured (with chickpea flour) cutting board or other work surface. 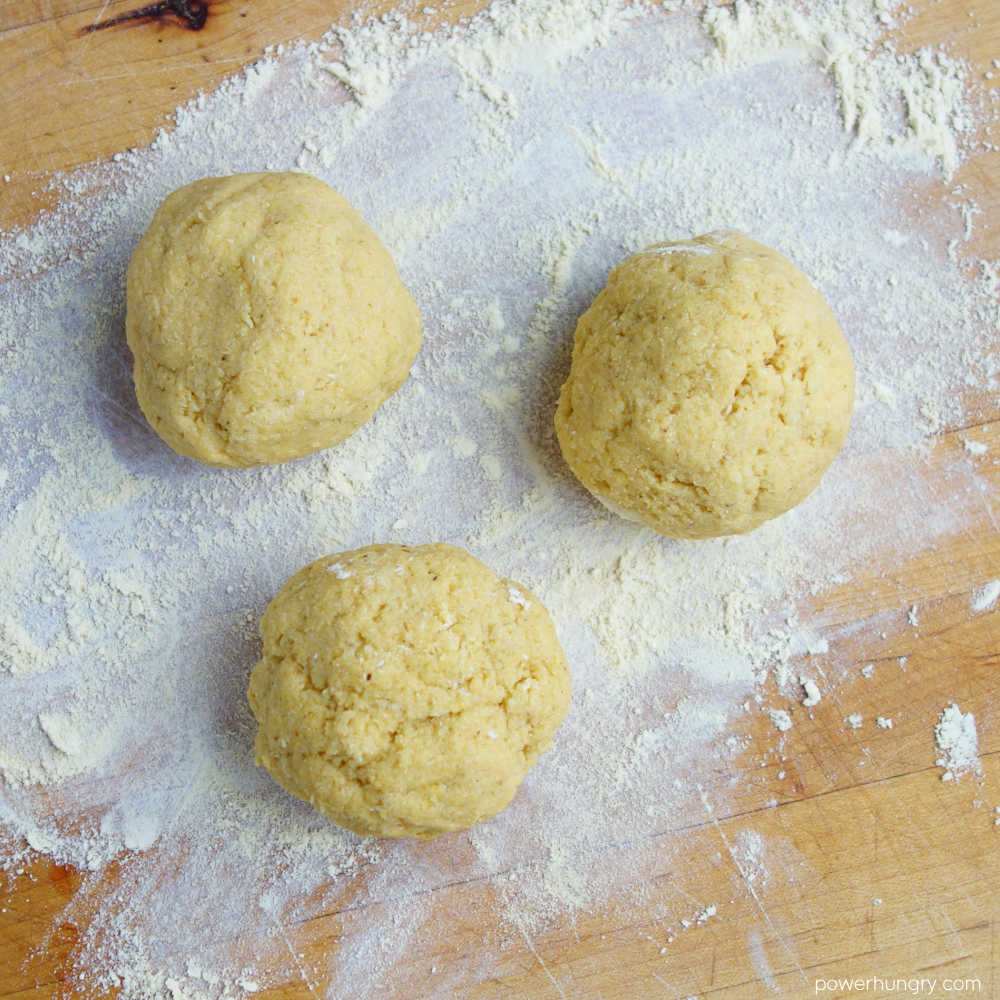 Place one dough ball in the center of the board and sprinkle with some of the chickpea flour. I like to press the dough out with my fingers to get started. Press the dough into an oval-ish shape. 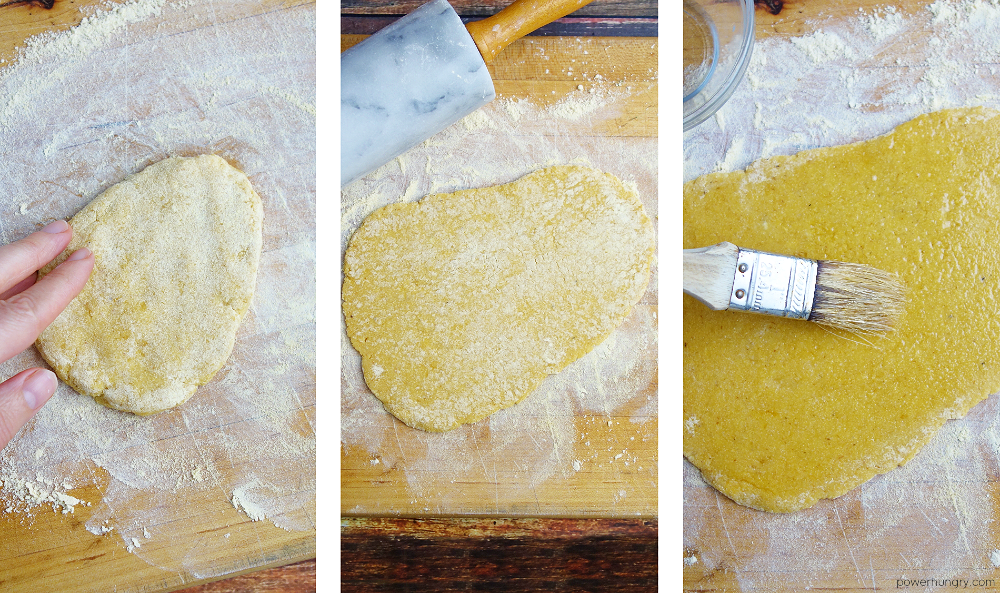 Heat a medium or large cast-iron skillet (or other heavy, non-stick skillet) over medium-high heat until it is hot.  Add a piece of the rolled-out dough, sprayed/oiled side down, to the skillet. Cook for 1 minute, or until the top of the dough begins to bubble up slightly in a few places (it will not be a dramatic rise) and the bottom has deep golden-brown spots (when you lift and peek).

Using a spatula, turn the dough onto the other side. Cook the second side for about 1 minute longer, or until the bottom it has deep golden spots, too.  Transfer the naan to a rack or plate.

Lightly cover the naan with a clean dish towel so that it stays warm.  Repeat with remaining dough until the other two pieces of naan are cooked. Adjust the heat of the skillet, as needed, to prevent the skillet from becoming too hot (to avoid scorching the naan).

The chickpea flour naan is best served warm, soon after making it.  If you like, sprinkle with some finely chopped cilantro or parsley, or a sprinkle of flaky sea salt. Yum! 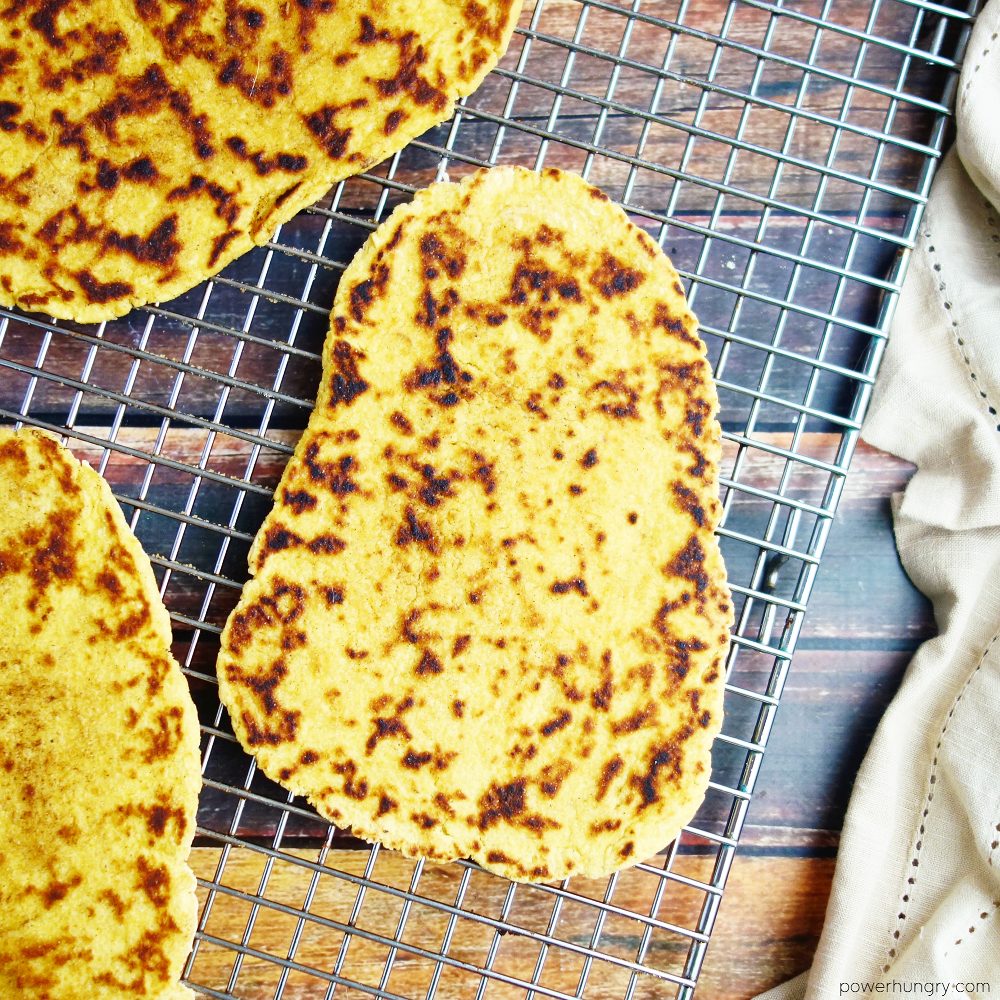 Note that chickpea flour naan is denser than traditional naan (the latter is fluffy and pliable). But this version is unique, delicious, and very filling, with a rich, nutty flavor. It is perfect with traditional Indian food, but also as an accompaniment to any soup, stew, salad, or any dish that could use some hearty bread alongside (that would be every dinner at my house).

Can I Use a Different Grain-Free or Gluten-Free Flor?

Can I Use Something Other than Whole Psyllium Husks?

Other gelling agents, such as flaxseed meal or chia seeds, will not work as substitutes for psyllium in this recipe.

Can Additional Flavors, Besides Garlic, Be Added to the Naan?

Chickpea flour tip: You can use any variety of chickpea flour (including varieties labeled besan, garbanzo bean flour and gram flour).

What can I use instead of oil?

Hi Gary, You could use more water, but I think it could be dry. Instead, pehaps replace all of the water, and oil, with nondairy milk, one that has some fat in it. That should work well.