Grain-free vegan matzo ball soup made with chickpea flour and whole psyllium husks (a unique egg replacer). It is also gluten-free and  100% kosher. 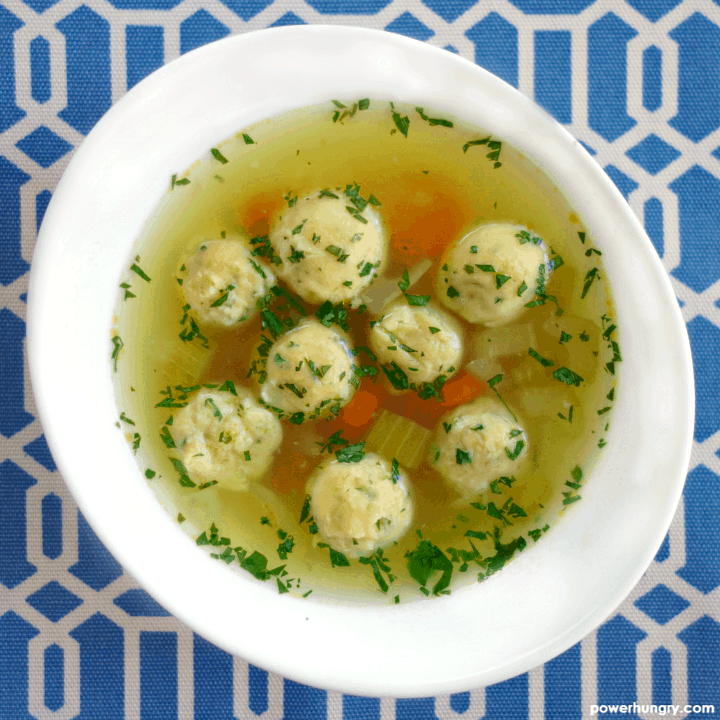 My college cafeteria gets the credit for my matzo ball soup affection. They offered a great one, rich with fragrant broth, tender vegetables and fluffy, yet also substantial, matzo balls. I had only read about matzo ball soup (from the All of a Kind Family series of books; I loved the food descriptions!), but after one serving, I was hooked.

I have made several versions of matzo ball soup in my own kitchen, following the sage instructions of Joan David, Mark Bittman, and others, but it had been more than a decade since my last batch. But I was prompted to think–and -re-think–matzo ball soup when I received an email request 2 weeks ago, asking if I might have any suggestions for making grain-free, vegan matzo balls. 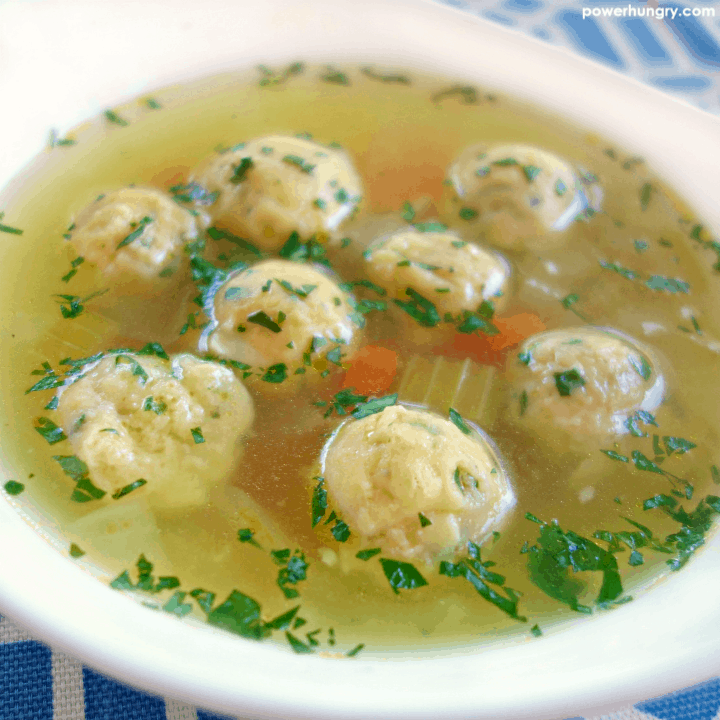 The matzo balls are simple to mix up, plus they cook in a fraction of the time it takes for traditional matzo balls. For reasons that will be explained below, the balls are kept small, so they are easy to scoop up by the spoonful.

Instead of matzo meal,  these matzo balls are made chickpea flour.

I knew that I could make great dumplings from chickpea flour. Chickpea flour has a rich, nutty, savory flavor that is imminently satisfying in a range of dishes. This includes dumplings of all kinds in the Middle East, and pasta and gnocchi in Italy;

Chickpea flour is kosher, but choose a brand that is certified (e.g., Bob’s Red Mill) if you are following a kosher diet.

The super-challenge was making chickpea dumplings that are also egg-free. My initial thought was that chickpea flour could serve as both egg (binder) and starch; it works so well in many of my concocted baked goods.

Wrong. The balls looked promising upon entry to the pot of boiling water, but disintegrated (entirely) minutes later.

So I tried adding “eggs” made of a ready-to-use egg replacement mix, chia seeds, and flaxseed meal. No, no and no. I also combined chickpea flour with almond flour, coconut flour, or both. Multiple sticky bowls and pots later, I was still stumped.

Racking my brain, I remembered one more option: psyllium husks.

After some more testing, it worked like a charm!

What is Psyllium Husk?

Psyllium husk  is made from the seeds of the plantago plant.

The seeds of the plantago plant are covered with an outer layer, or “husk,” that is high in both soluble and insoluble fiber. The husk is called mucilage, and, when mixed with liquid, forms a gel that can be used as an egg replacement in some baking recipes! Pretty nifty!

I have used psyllium husk in quite a few recipes here on powerhungry (use the search bar, type in “psyllium”). It turned out to be exactly what these matzo balls need to hold together. If you are new to using whole psyllium husks, it looks like this:

Can I use Psyllium Powder instead of Psyllium Husk?

Yes, you can! You will use the same weight, but the measurement (teaspoons) is different.

This recipe calls for 2 tablespoons (10 grams) whole psyllium husks. You can use an equal weight (10 grams) of psyllium powder instead.

How to Make the Soup

Mix the chickpea flour and baking powder with the water, a bit of olive oil, and (optional) chopped parsley, dried dill and salt. The dough will be moist and sticky. Loosely cover and refrigerate for at least 15 minutes to thicken (the psyllium will gel with the water).

Make the Soup Base

After the dough has set up, make the soup. The ingredients are classic and minimal: carrots, celery, onion, olive oil for sautéing, and broth (I used vegetable broth). I like to add a pinch of cloves and pepper, too, but these are optional.

In a large, wide pot, sauté the vegetables in oil for 5 to 6 minutes until softened. If using cloves, add with the pepper in the last 30 seconds of cooking.

Add the broth, bring to a boil, and then simmer while prepping the matzo balls.

Roll the Dough into Balls

Shape and roll the dough into small balls; they will double in size as they simmer. Do not make them larger; it only takes a few minutes to cook the small balls. Larger balls will disintegrate with a longer cook time. If you like, you can prep these balls in advance, cover, and place back in the refrigerator until it is time to eat the soup.

With traditional matzo ball soup, the matzo balls are simmered separately from the soup in a large pot of water or broth. This is done, in part, to keep the soup clear (the matzoh balls break down a little bit as they cook; the murky water is left behind in the matzo ball water).

The extra pot/step is not needed with these little darlings, because they only need about 5 minutes to cook! Once the soup is ready (vegetables are tender, soup is flavorful), bring back to a low boil. Add the matzo balls. They will sink at first, but rise to the surface in  30 seconds or so. Reduce the heat to low and simmer, uncovered, for about 4 to 6 minutes longer, just until the matzo balls appear firm.

That’s it! Ladle the soup into bowls, sprinkle with parsley, and serve immediately.

Enjoy, & Happy Hanukkah to all who are celebrating!

Storage: Store the leftover soup in an airtight container in the refrigerator for up to 3 days. When reheating the soup, remove the matzo balls. Add the matzo balls back in when the soup is very hot (heat the balls for about 1 minute in hot soup).

I love this, it is a great option for our family, thank you!

You are very welcome, Sabrina!

Hi! In the article, you say that the recipe calls for 2 teaspoons of psyllium husk and that you can use 1 1/4 teaspoon of powder instead.

However, in the ingredients list, it calls for 2 tablespoons of husk. Is this a typo?

Can the Matzo ball be frozen if not used.

No, they are a bit too delicate to be frozen.