Good morning and happy Monday, everyone! I’m up and going with some significant assistance from my morning brew and a giant bowl oatmeal. I managed to get in some speedwork drills on the treadmill before the sun was up, but honestly, it could have been a dream (I think some–husband included–might say nightmare). I’ll know the answer when the coffee and oats finish revving my engine.

The reason for my morning haze is that I stayed up far too late last night. I wish I could report that it was spent on something fun, but, in my book, it is just as good, perhaps even better: I finished filing a heap of papers that has been tormenting me from a neglected corner of my office.

Yes, living large my friends! I am, in fact, thrilled, because I have had this task on my to-do list too many times to count and now  it is DONE. Isn’t that the best feeling? On a Monday morning, no less. It was so worth losing some shut-eye.

But now, it’s time for a healthy treat. Namely, the recipe for a grain-free, coconut flour biscotti I promised to a reader several weeks ago. It took some trial and error (no, errors), but it was worth it. 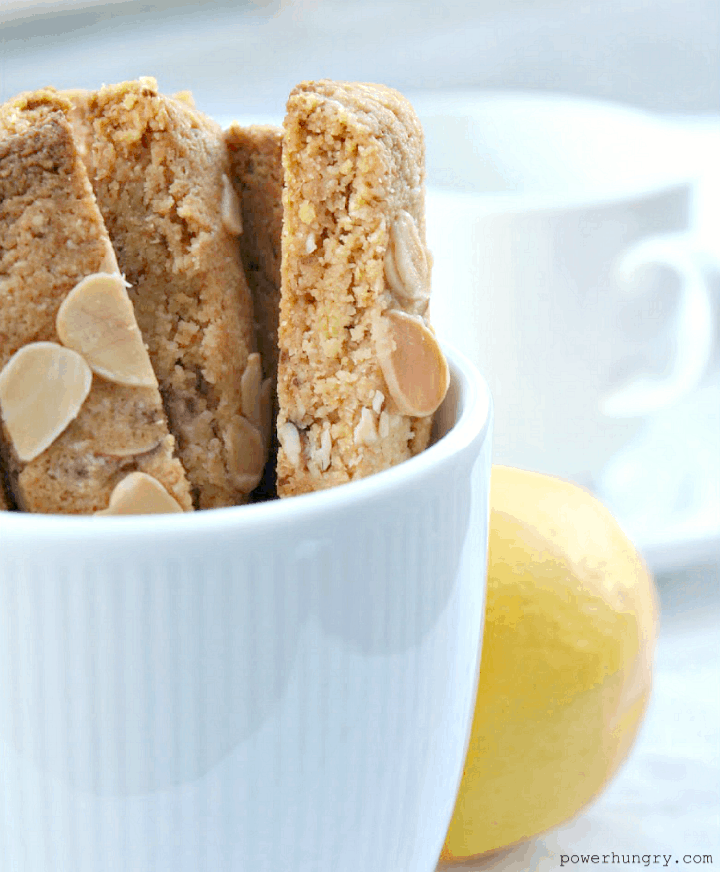 Coconut flour is a delicious ingredient, but oy vey, is it ever persnickety! It needs a lot of added structure (e.g., eggs and/or other proteins, starches, or vegan egg substitutes) to make it “work” in baked goods. I am still on a quest to make an all-coconut flour biscotti, but for now, I offer these crave-worthy biscotti, made with a combination of coconut flour & almond flour.

They are everything biscotti should be –crunchy, dunkable, not too sweet and not too hard–with the bonus of being easier (and faster) to make than traditional biscotti (i.e., you can make them before you are fully awake or while trying to stay awake; I tend to bake in one of these two states of being :)) 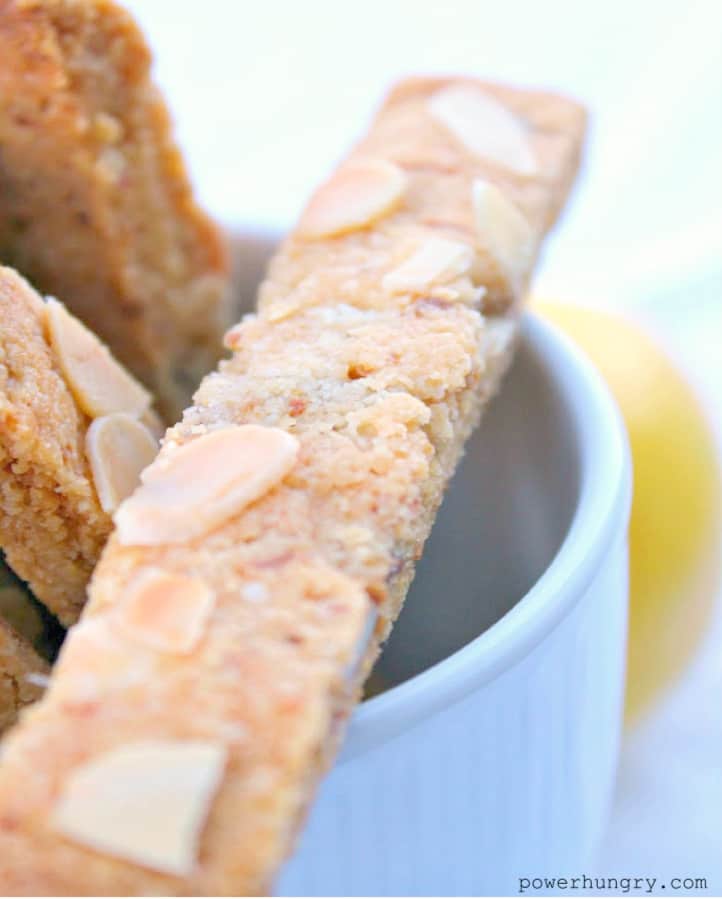 No need to pull out an electric mixer or food processor; just two bowls (one for wet, one for dry) a whisk and a spoon to combine everything in about 3 minutes. After shaping and baking the dough in a log, simply slice and bake again; the second bake does not take as long as grain biscotti as the almond flour and coconut flour become crisp quickly.

You’ve probably noticed that these biscotti do not rise quite as high as grain flour biscotti, but they make up in flavor & texture what they lack in height.

How about one last piece of great news to encourage you to make a batch, pronto : these biscotti are packed with great-for-you ingredients and minimal (natural) sugar, qualifying them as breakfast and snack fare, as well as dessert. Hurrah!

Happy baking and eating, everyone!

Storage: Store the completely cooled biscotti in an airtight container at room temperature for 3 days, the refrigerator for 2 weeks or the freezer for up to 6 months.

Use Real Eggs if Not Vegan: If you do not need the recipe to be vegan, use 2 large eggs in place of the vegan eggs in step 1.

Flavor Change-Up: Nix the vanilla and add any other flavors you like (e.g., almond extract,  other citrus zests, etc.). and add up to 1/2 cup of your favorite mix-ins (e.g., mini chocolate chips, seeds, chopped nuts, etc).

These are very good! I too am lower carb so subbed granular Allulose -but added 3 TBSP of almond milk (to replace the 3 tbsp of liquid from the honey). As you suggested, stuck in the fridge for 40-minutes. It cut right through, without any crumbles. :) I made these into larger Biscotti. After slicking and before going back into the oven, I snuck an end piece and they are so delicious. The coconut flour really helps the almond flour not be so grainy. :) Thanks for a great recipe!

So gld that these worked out for you, Gary!

I made these biscotti last night. I added about 1/2 cup toasted coconut with the almonds. They are quite good. I let the loaf cool completely before I cut it. I had no problem with crumbling. Definitely a keeper.

So happy to hear thy worked for you, Robin! Cooling completely is definitely the key to limit crumbling :)

Thank you for creating this recipe! The flavor turned out great, however, they are falling apart.. I had a hard time cutting them w/o them breaking up. I know these “flours” are so finicky. Any idea how I can prevent them from crumbling? Thank you!

Hi Heather, Sorry to hear about the crumbling! I do have a trick. I mention it in a much later post (vegan almond flour biscotti)--it works for all biscotti! After the first bake, cool the log completely (go ahead and turn off the oven). CHILL the cooled log for at least an hour until cold (or place in the freezer for about 30 minutes). The log should hold together well when you slice it (no crumbles :))

How can I make this recipe keto? I want to eliminate the syrup.....please and thanks!

Hi Anne, There are a number of keto-friendly liquid sweeteners on the market you could use in place of the honey.

Whats the shelf life? Can it be stored in a normal snck jar in pantry for 2 weeks at least?

Hi Mandeep, Sorry, it seems I left out the storage info, I will add it! These keep best in a tin (so that they do not get moist) at room temperature, or freeze for up to 6 months.