High-protein vegan pasta fagioli soup made with chickpea pasta! It is grain-free, gluten-free, and has 16.8 G protein per 1.5 cups serving. 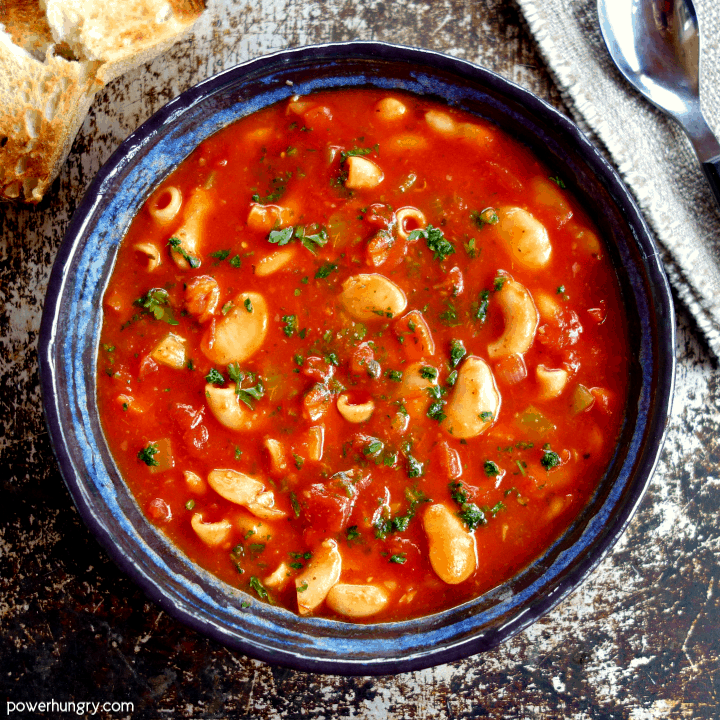 This is exactly what your February, post-Superbowl Monday ordered: a quick, hearty, homestyle soup that doubles as a restorative.

This easy soup is also:

Sound good? Then grab a pot, because you need to make my Chickpea Pasta e Fagioli, asap!

Pasta e fagioli (literally pasta and beans) is classic Italian comfort food. Recipes vary from one household and region to another, much like American chili, but most have some permutation of chopped vegetables (carrots, onions, celery and garlic) and pureed tomatoes in addition to the beans and pasta

Making the soup grain-free, as well as extra high in protein, is simple as this: use pasta made from chickpea flour in place of traditional pasta!

Chickpea flour pasta is a traditional option in Southern regions of Italy, so using it in pasta e fagioli is a thoroughly authentic choice.

Chickpea pasta is an increasingly easy choice to make, because: (1) multiple brands are making chickpea pasta (e.g., Barilla, Banza, Lensi, Thrive Market, and Tolerant), and (2) it is becoming widely available in supermarkets and superstores (such as Walmart and Target).

In addition to being grain-free, chickpea pasta has fewer net carbs, more than twice the fiber, and almost twice the protein of regular pastas. And it tastes delicious, too! It’s a no-brainer if you are trying to get more protein from plant-based dishes.

The other major soure of protein is, naturally, the beans (this time in their traditional bean form :)).

I use two cans of butter beans. Butter beans  are large lima beans. You may not have noticed them, but they are right there with all of the other beans. I like them for thier creamy, firm texture, but you can also use white beans (e.g., cannellini, Great Northern)  or light red kidney beans can also be used.

Drain and rinse the beans, then coarsely mash HALF of them.

Mashing half of the beans accelerates the thickening of the soup, making it taste like it has been cooking for hours, rather than minutes.

In a medium saucepan, sauté the carrots, onion and celery for 5 to 6 minutes until softened. Add the garlic and sauce 1 minute longer.

Add the tomatoes, water, and dried herbs to the saucepan. Bring to a boil, and then simmer for 15 minutes.

Stir in the beans and pasta and cook for 10 to 12 minutes more, or until the pasta is tender.

Adjust the seasonings to taste, sprinkle with some (optional) chopped parsley, and dinner is served!

Storage: Store the cooled soup in an airtight container in the refrigerator for up to 3 days or the freezer for up to 6 months.

Pasta Options: If you do not need or want the soup to be grain-free, feel free to use the (small-shape) pasta of your choice. I do not recommend gluten-free pastas made from rice (they tend to disintegrate in soup).

Awesome recipe!! Thanks for sharing your talent and wisdom.

Ah, thanks so much Bo!