What is Tigernut Flour?

Tigernut flour. Have you heard of it?

It’s a delicious, nutritious, multipurpose flour that can be used in all manner of baking and cooking, including today’s dark chocolate brownie recipe.

But before returning to the brownies, a bit more about tigernut flour. Tigernut flour is made from tigernuts, which are neither nut nor tiger. Rather, tigernuts are tubers that get their tiger moniker from their subtle striping. When the peeled tigernuts are milled, the result is a fine, light-colored flour with a faint, nutty-sweet aroma and flavor. 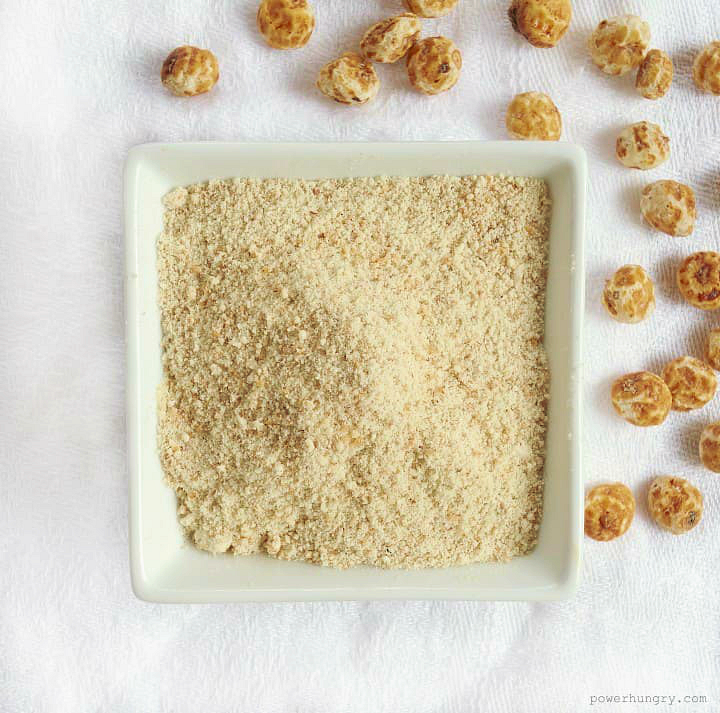 Tigernut flour is versatile (think sweet & savory) and, in the recipes I have fiddled with, it produces delicious results that are akin to wheat flour. Though I am still getting used to how it works across a range of recipes, I can say that, thus far, experimenting with it is easier than coconut flour.

Think of tigernut flour as more than a substitute for wheat or nut flours. Rather, it is a superfood in its own right with a wealth of health benefits, including a wealth of fiber, minerals and vitamins.

Tigernuts (and, consequently, tigernut flour) also happens to be the highest whole food source of a particular type of fiber called resistant starch.  Resistant starch is a pre-biotic (i.e., great for the gut), which means it feeds the good bacteria in your digestive tract.

One reason I have held back from using it much is the cost. It is not cheap (pound for pound, close to the price of almond flour, usually a few dollars more). However, I have been enjoying it so much that I decided I should leave the choice of purchase up to each of you!

Additionally, the more I use this versatile flour, the more I realize that, similar to coconut flour, tiger nut flour recipes typically use a fraction of the amount of flour used in almond or grain flour recipes. Hence, while the initial investment may seem expensive, a single pound bag ends up being cost effective, producing a generous number of recipes.

How to Make Grain-Free Vegan Brownies with Tigernut Flour

Now, onto the brownies!

The batter is a breeze. Simply soak chia seeds in the milk of your choice and then stir in everything else. 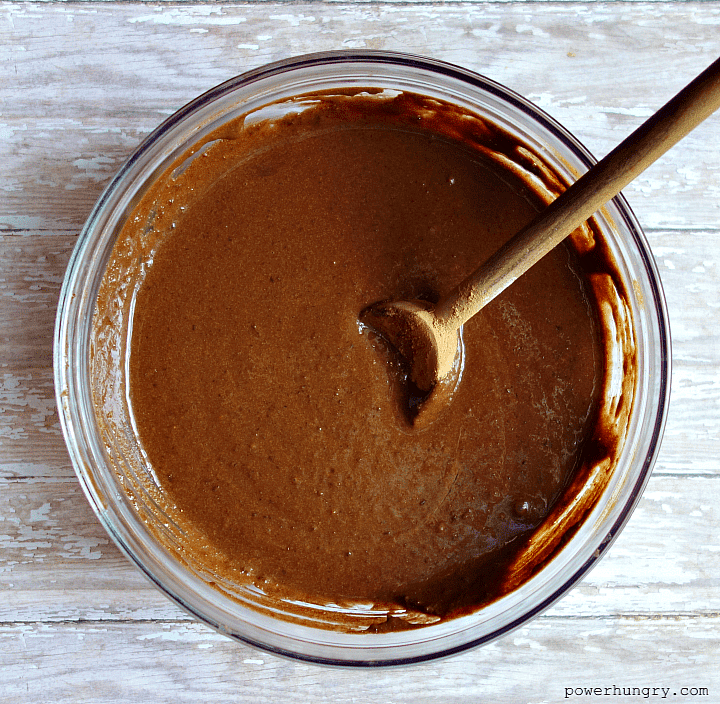 I recommend sifting the dry ingredients together; both the tiger nut flour and cocoa powder tend towards lumpy bits, which can be a pain to stir out once wet and dry are combine.

If you forget, you can always plunge a stick blender into the batter to smooth it out (don’t take too long, though; the baking soda has already started working once dry hits wet, so get the batter into the pan as soon as you can).

You can spread the batter into the pan and stick it right into the oven, or add chopped bits and bobs of your choosing on top.

I just finished cleaning out the freezer AND deep freezer (whoo-hoo! I know how to live it up!) and found a variety of nuts, seeds & extra-dark chocolate chips, so I decided to add an assortment (to celebrate the newly organized freezers; I am weirdly excited and pleased with this accomplishment :)). 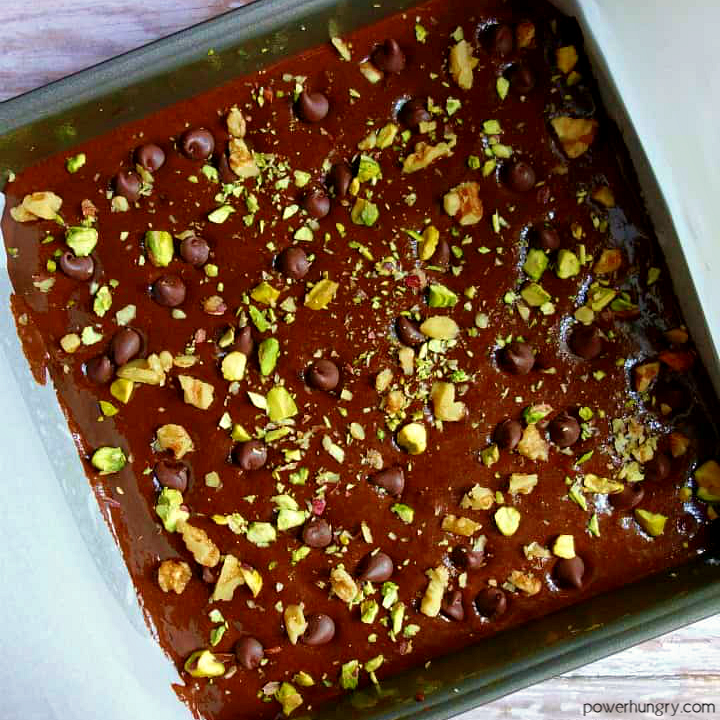 Who Can Eat Tigernut Flour Brownies?

Holiday gatherings–and holiday baking, especially– have been on my mind a lot lately, in large part because of mentions by friends and acquaintances of “what can I make that everyone can eat (and enjoy).”

Brownies are easy and welcoming, and this tigernut version will please all and suit the following: 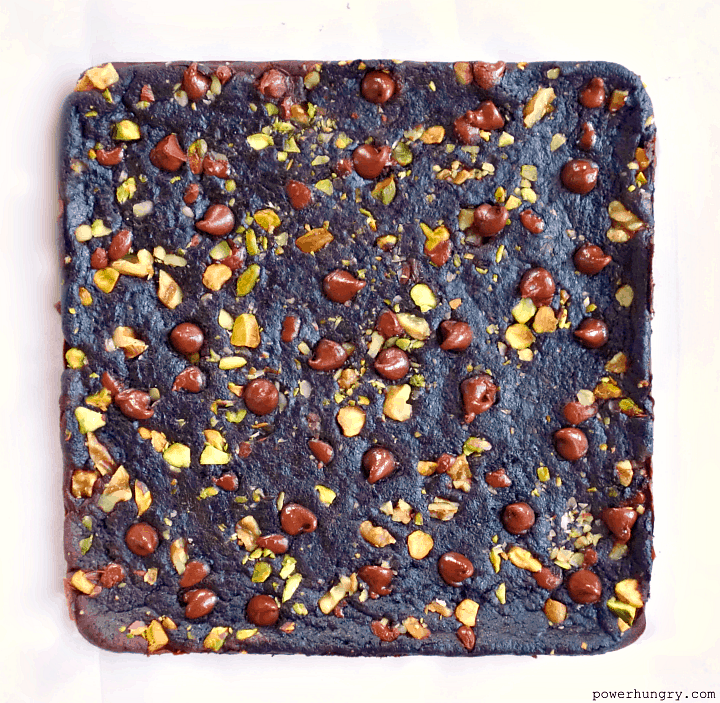 How Do the Brownies Taste?

The proof of the pudding (and the brownies) is in the tasting, and believe me, these prove to be utterly delectable! Rich and decadent, but no jittery sugar rush after enjoying.

I’ll be adding some more tigernut recipes to the mix of recipes here on power hungry–I am confident you are going to enjoy using it, too. These brownies are a great way to start! 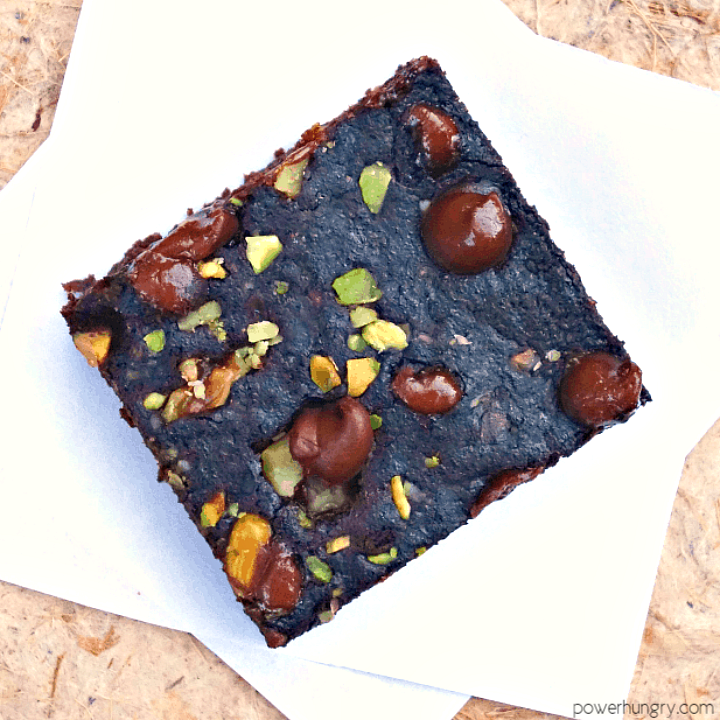 Starch Tip: An equal amount of arrowroot can be used in place of the tapioca starch.

Sweetener Tip: An equal amount of honey or coconut sugar (or brown sugar) can be used in place of the maple syrup.

Storage: Store the brownies in an airtight container in the refrigerator for up to 1 week or the freezer for up to 3 months.

What can I use as a replacement for chia seeds? I follow an Aip diet. Thinking I could mix gelatin w/coconut milk in that step. 1tbsp gelatin ?

I am a VNO. Vegan no oil. Any replacement suggestions? Thanks.

Yes, I have a solution! Use full fat coconut milk for both the nondairy milk (1/2 cup) and the oil (an additional 1/3 cup) in the recipe. It should work perfectly!

Also, if you eat oats and coconut flour, I posted an oil-free brownie recipe today that is very easy and very delicious :)