Individual 3-ingredient keto vegan almond bread ! Made in a muffin tin, it is grain-free, gluten-free and oil-free. Ready in under 30 minutes, start to finish. 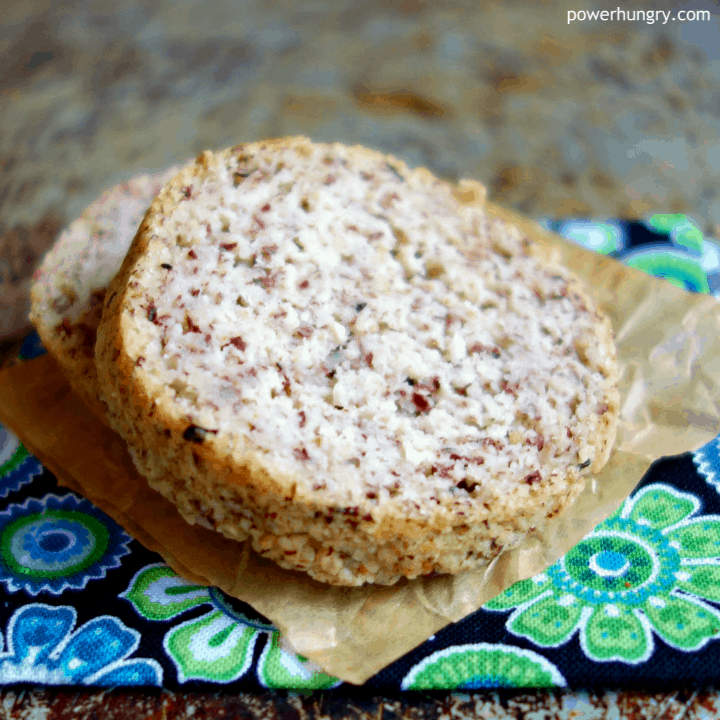 Hi all! I have been working on a simple, versatile bread that I hope you will enjoy. I know that I am loving it. It is a breeze to prepare and has a soft tender texture, perfect for toasting and making mini sandwiches.

Also, it has merely 3 ingredients.

Traditional bread recipes have a minimal number of ingredients. Very often it is little more than flour, yeast and water. Shouldn’t grain-free breads be just as simple? That was my inspiration for this recipe. The bread is:

The ingredients? Almond meal (or almond flour), baking powder and psyllium husk (plus water and optional salt). I’ll get to the almond meal in a moment. First, the psyllium husk.

What is Psyllium Husk?

Psyllium husk  is made from the seeds of the plantago plant.

The seeds of the plantago plant are covered with an outer layer, or “husk,” that is high in both soluble and insoluble fiber. The husk is called mucilage, and, when mixed with liquid, forms a gel that can be used as an egg replacement in some baking recipes! Pretty nifty!

I have used psyllium husk in quite a few recipes here on powerhungry (use the search bar, type in “psyllium”). It turned out to be exactly what this bread needs to work. If you are new to using psyllium husk, it looks like this: 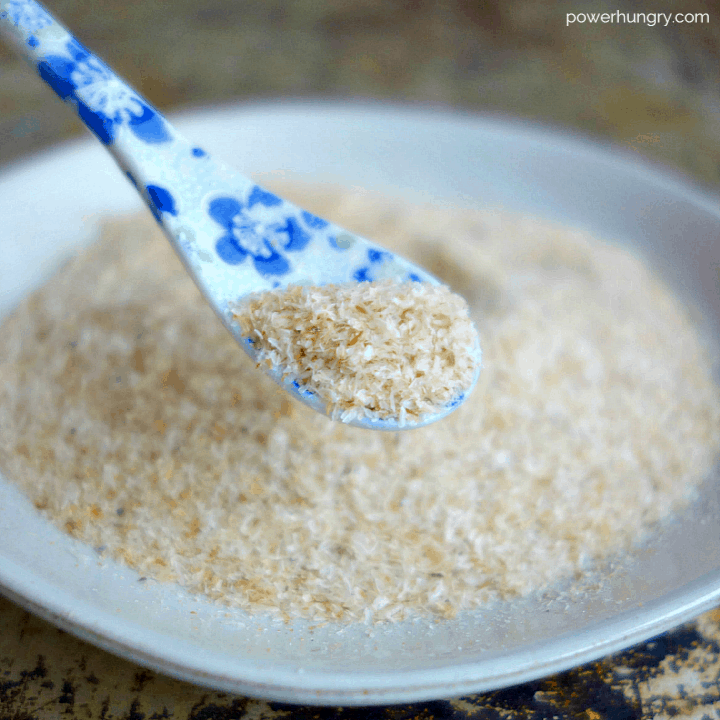 Can I use Psyllium Powder instead of Psyllium Husk?

Yes, you can! You will use the same weight, but the measurement (teaspoons) is different.

Psyllium as an Egg Replacement

Psyllium lends essential structure that the protein in gluten or eggs provides in traditional bread recipes. It is quite different from any other egg replacement, so I cannot recommend any subs for it in this recipe.

Mix the psyllium husk with cold water to accelerate the gelling. Here’s what it looks like when gelled with a ration of 2/3 cup water to 2 teaspoons psyllium husks: 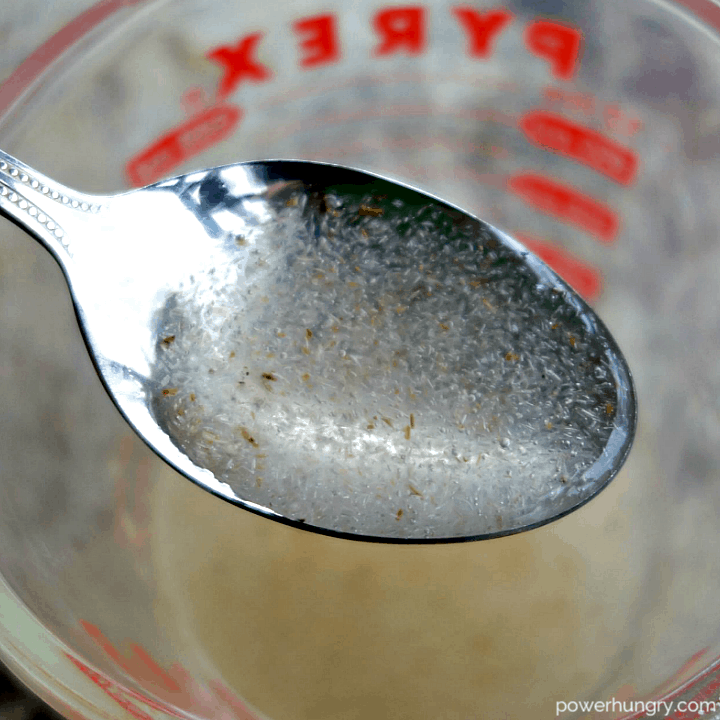 The Difference between Almond Meal and Almond Flour

Now, the almond meal. This bread works best with almond meal. The reason? The extra fiber from the almond skins provides extra structure to the bread. It will work with blanched almond meal (made from skinless almonds), but the rise will be marginally lower.

But there is no need to fret, as your eyes will tell you everything you need to know: almond meal is made with almonds that still have their skins, resulting in a brown-flecked, slightly coarser product than finely ground almond flour (which is made from blanched almonds; i.e., no skins).

If what you have is pale and uniform in color, it is made from blanched almonds and is almond flour. 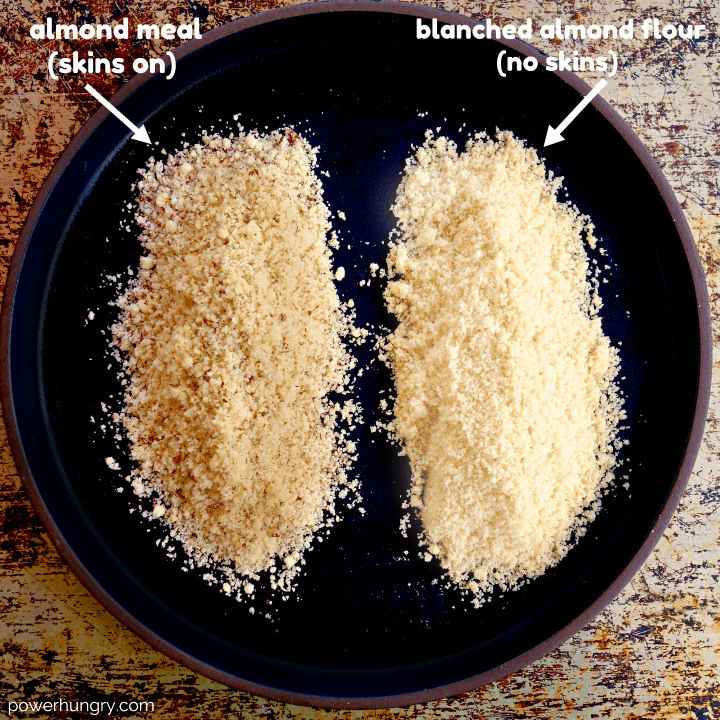 How to Make Keto Vegan Almond Bread with 3 Ingredients

To ensure that this bread is 100% grain-free, use a baking powder that uses tapioca starch or arrowroot instead of cornstarch. Other than that, baking powder needs no further explanation. So let’s get baking!

First up, make the aforementioned psyllium gel by mixing the psyllium husks with cold water. Give it the full amount of time to thicken.

Next, combine the psyllium mixture with the almond meal and baking powder. 10 seconds later, you have dough. Specifically, a dough that is light and springy in texture and easy to handle. 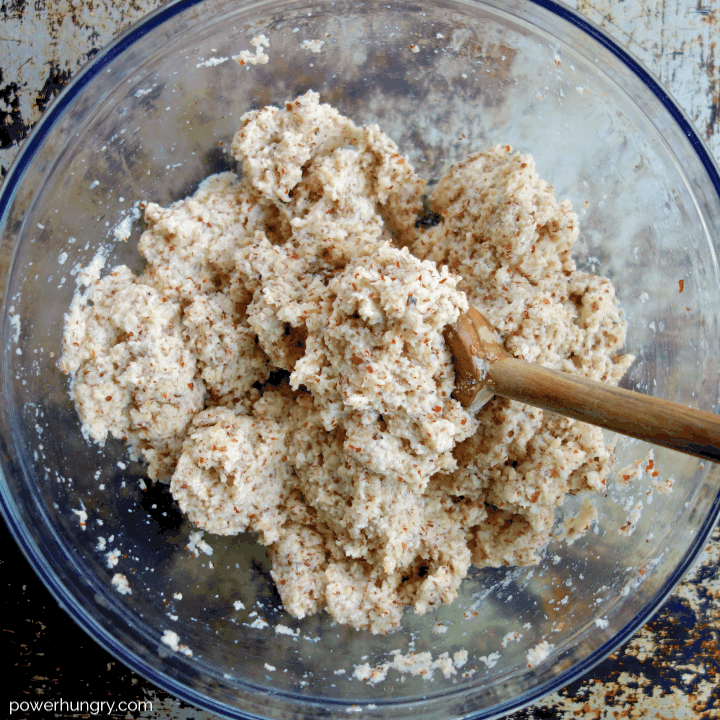 Divide the dough into nine even portions, shaping each portion into a patty. Place each patty in the greased/sprayed well of a standard-size muffin tin.

Once fully baked, the bread centers should have no more than the slightest indentation, if any, and should be firm to the touch. 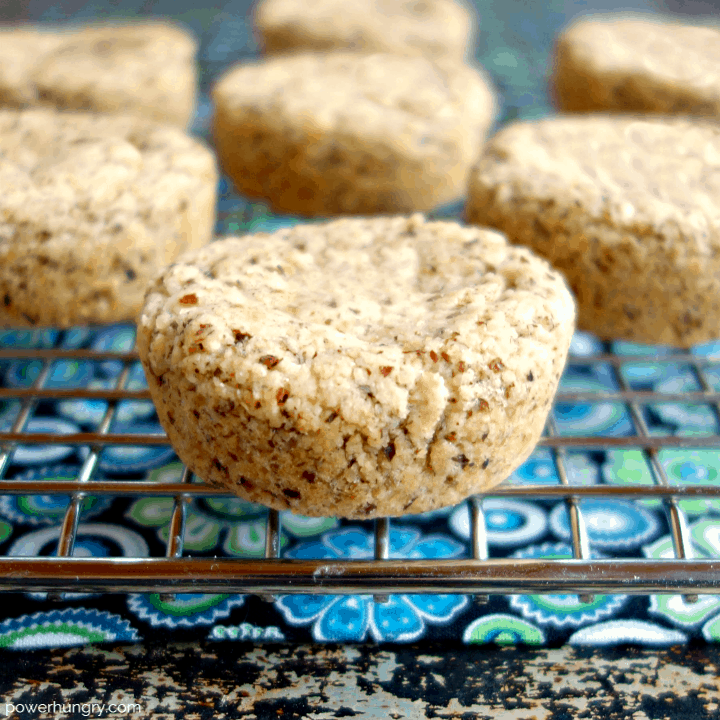 Cool the breads completely on a wire rack, then enjoy! The breads slice beautifully, and the texture is incredibly light.

These breads will only work when made in a muffin tin, but rest assured, I am working on larger loaf options! I just ordered umpteen more bags of almond meal for testing. Until then, enjoy the minis, and happy baking! 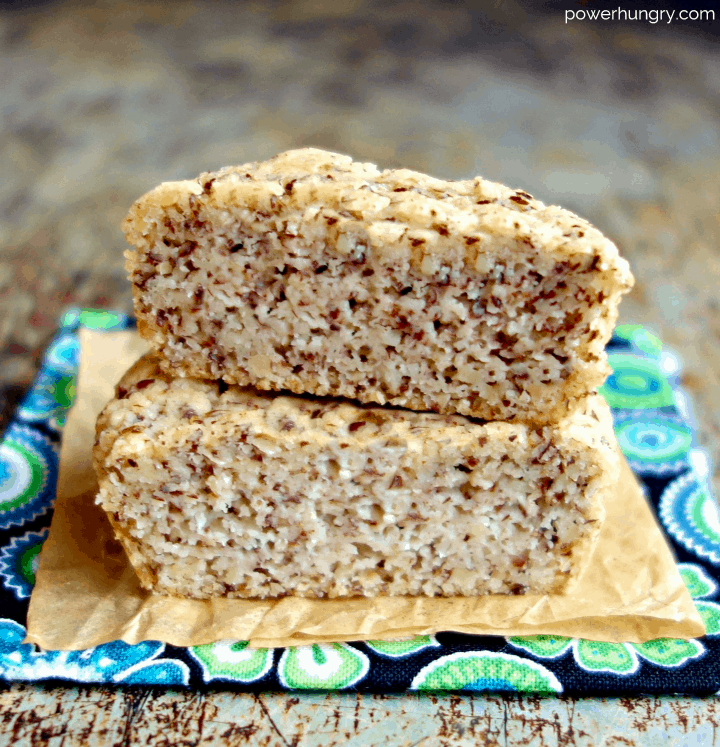 Tip: Be sure to use almond meal, not blanched almond flour, for this recipe. The latter will not work (the breads collapse).

Storage: Store in an airtight container in the refrigerator for up to 5 days or freezer for up to 3 months.

Hello! Is there a loaf version of this bread?

Thank you so much for sharing this recipe! I made it and it was so good. I want to make it again, but this time, adding something to give it a little more flavor. Maybe a light sweetener, cinnamon, vanilla extract, etc. What would you recommend?

Hi Nancy! So happy to hear that this was a sucess! Yes, you can do any and all of the flavors you mention. Another upside of a vegan grain-free bread like this is you can taste it, raw, before baking, so that the flavoring s can be adjust. would start with 1 teaspoon vanilla extract, 1 to 2 teaspoons cinnamon (depending on your preferences) and perhaps 2 to 3 tablespoons sweetener, such as coconut sugar. I think any sweet spice could be added (love cardamom, too), and a little bit of almond extract (about 1/4 teaspoon, up to 1/2 teaspoon) with spices and some sweetness should be heavenly.

Hi I was wondering if I could use a loaf pan instead of muffin thingies... this bread is soooo good

Delicious! These are a regular in our breakfast rotation. We usually enjoy them topped with a spoonful of preserves. The first time I tried these, I used 2 tablespoons of ground chia because it's what I had on hand. I also had no baking powder so I used 1 scant teaspoon of baking soda, plus 1-1/2 tbsp of vinegar (included in the measure of water so it wasn't too wet). Well they came out so good, I sometimes still use chia if I'm out of psyllium. As an occasional change, I sometimes add a bit of almond extract or 5-6 drops of essential oil (lemon or orange). This is one of my family's favorite recipes ever!