Fudgy, oil-free vegan almond flour brownies, designed to rock your world. They are grain-free, gluten-free, made in 1-bowl, and definitely delectable! Make the brownies nut-free by using sunflower seed flour in place of almond flour. 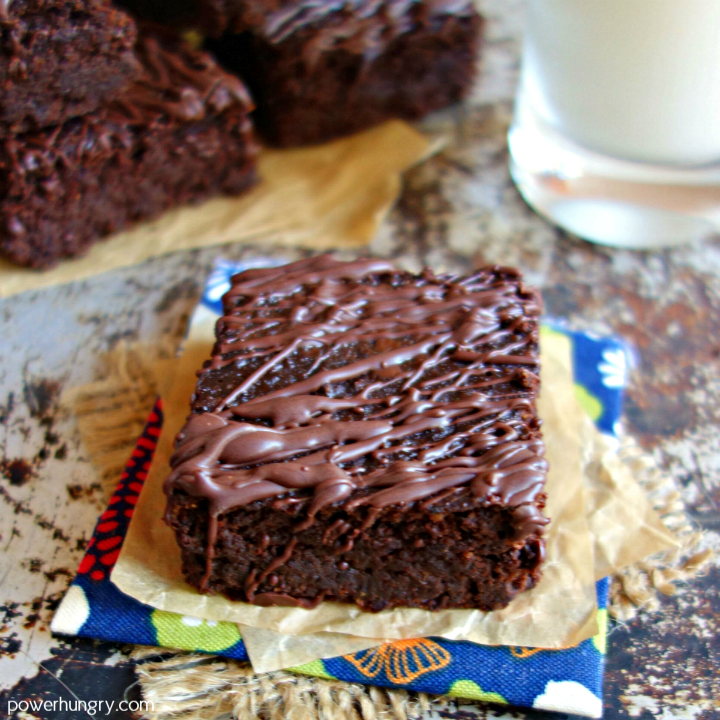 Oh, hello there Monday. I think you need some brownies.

It’s been many years since I first made a batch of vegan almond flour brownies on this site. I picked up a bag of almond flour on a trip to Houston, excited about my first venture with my newfound ingredient. Brownies were an excellent choice (forgiving, easy), providing me with the chocolate encouragement (is there any better kind?) to keep using it.

I still make versions of those first brownies, but I decided it was time for a tweak. Namely, a fudgy tweak. I managed that by changing the type of egg replacement. Further, I decided make this batch with coconut sugar (you can use any granulated sweetener you like) instead of maple syrup. My original recipe calls for 2/3 cup maple syrup. I know, a teeny tiny bit pricey. The brownies are are worth it, but I knew I could save the maple syrup for pancakes and proceed with a more frugal option.

And so the experimenting began. I think you will be as happy with the results as I am!

The ingredients for these brownies are not that far afield from traditional brownies, save for the type of flour (almond instead of all-purpose), and chickpea flour in place of eggs.

Chickpea flour works beautifully here, binding the brownies (so that they are fudgy but not crumbly) and contributing a smoothness that intensifies the overall richness (chickpea flour is used in Indian sweets akin to fudge). My original recipes relies on flaxseed meal; the chickpea flour finer-textured result.

Cold coffee intensifies the chocolate flavor of the brownies, but water or nondairy milk are perfectly fine substitutes (in case you want a milder flavor, and/or want to skip the added caffeine).

I use 3 tablespoons of applesauce in the brownies. You could also use canned pumpkin puree (you will not taste the pumpkin) or another neutral vegetable puree, like zucchini. The fat from the almond flour makes the brownies fudge-y.

If you want to make the brownies extra decadent, swap the applesauce for an equal amount of the neutral oil of your choice.

Whether for reasons of food allergies, frugality, or both, you can also make the brownies by subbing an equal amount of my DIY Sunflower Seed Flour (or ready-to-use sunflower seed flour) for the almond flour. The brownies are equally irresistible!

How to Make the Brownies

It’s no wonder we all love brownies: in addition to chocolate fudge brilliance, they are very quick and easy to make. These grain-free, vegan  almond flour brownies are no different. You will only need 1 bowl to make them, too.

Begin by combining the almond flour, coconut sugar, cocoa powder, chickpea flour, baking soda and salt in a large bowl. A whisk can help to break up any lumps in the flours or cocoa powder.

Add the cold coffee, applesauce, and vanilla to the same bowl. Stir until the batter is completely blended, breaking up any lumps with the back of the mixing spoon.

If you are using the optional 1/4 cup mini chocolate chips, stir them into the batter now. If you like the look of the drizzle, reserve the chocolate chips for later (melt and drizzle over the cooled brownies).

Step 3: Spread the Batter in the Pan

Spread the batter into an 8-inch (20 cm) square baking pan. I spray the pan as well as line it with some parchment paper (for easier removal, post-bake). The batter will be quite thick; smooth the top with the back of the mixing spoon.

I Do Not Have an 8-Inch Square Pan. What Can I Do?

The default sizes for most square baking pans in North American are 8 inches (20 cm) or 9 inches (22.5 cm). I am using the former. Using this smaller size allows for thicker brownies (with this quantity of batter).

A 9-inch square pan can be used in place of the 8-inch pan. However, it is important to reduce the baking time by about 5 to 6 minutes. The brownies will also be thinner.

A second option is to use a 9-inch round pan. The capacity of the 8-inch pan (64 inches) and the 9-inch round pan (63.58 inches) is nearly the same, so there is no need to adjust the baking time.

Step 4: Bake the Brownies in a Preheated 325F Oven

Bake the brownies in a preheated 325F (160C) for 25 to 30 minutes longer until just set and a toothpick inserted near the center of the brownies comes out with a few moist crumbs attached.

If you are not sure if the brownies are done, I suggest erring on the side of under-baking. The brownies will continue to bake, even once removed from the oven ( due to carryover baking from the heat of the pan).

Transfer the pan to a wire rack and cool completely.

Once the brownies are completely cool, use the parchment paper liner to help remove them from the pan to a cutting board. Cut the brownies into 16 squares.

I have no problem with a few crumbs from cutting (possibly because I get to eat the crumbs). If you prefer precise squares, freeze the brownies for 30 to 45 minutes before cutting. Use a large kitchen knife to make clean, even cuts (rather than the serrated number I’ve used here).

Help yourself to a brownie, ASAP! I insist.

If you reserved the mini chocolate chips for a final flourish, melt them to add a drizzle on top.

I place the chips in a small glass bowl or ramekin and melt in the microwave. Use 30 second intervals, stopping to stir after each, until the chips are melted and drippy. Unleash your inner Jackson Pollack and drizzle away!

One brownie is immensely satisfying.

How to Store the Oil-Free Vegan Almond Flour Brownies

The brownies are best stored in an airtight container in the refrigerator for up to 5 days. If your house is cool, they will also keep for a day (in the same covered container) for a day.

If, for some strange reason, some brownies remain after 5 days (how possible?), store them in an airtight container and freeze for up to 3 months.

Storage: Store the cooled brownies in an airtight container at cool room temperature for 1 day, the refrigerator for 5 days, or the freezer for up to 3 months.

O.M.G. I think you may have created the ACTUAL best brownie recipe! no others I've tried live up to the claim like these do. thank you so much for this and all of your delicious recipes. keep being amazing!

Holy wow, thank you Dani! I am so happy these lived up to their claim 😍

These brownies are awesome! I didnt have sugar so I grounded some dates with water, and had to add extra water. but I'm definitely making them again! :)

Great sub, Luss! I am so glad you are enjoying them (hooray for brownies :))

How many eggs can you use to replace the chickpea flour?

Dayna, I suggest 1 large egg. Eliminate the chikpea flour and reduce the coffee/water to 1/4 cup (instead of 1/3 cup).

I made these today and they came out wonderful! The only adjustment I made was substituting coffee for chicory. Thank you for sharing this recipe, will definitely be making these again 🙂